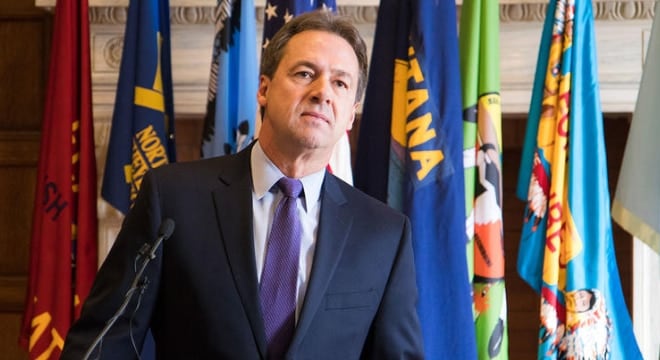 Gov. Steve Bullock this week rejected a constitutional carry bill for the third time since 2013 as well as one allowing guns at post offices in Montana. (Photo: Freddy Monares/UM Legislative News Service)

The bills, passed along party lines earlier this month, would have updated the state’s concealed carry laws while potentially setting the stage for a potential 10th Amendment challenge with the federal government. In the end, Bullock would have neither.

The carry reform legislation, HB 262, would have allowed the carry of concealed firearms in the state without a permit providing the resident can legally possess a firearm. Currently, the state enjoys a rural form of constitutional carry, with permits only required inside certain city limits. If signed into law, the patchwork system would have homogenized statewide to permitless carry, also known as constitutional carry.

Citing he had twice before rejected such a plan, Bullock pointed out in his veto letter to House Speaker Austin Knudsen, R-Culbertson, and Senate President Scott Sales, R-Bozeman, that the third time was not to be the charm.

Meanwhile, in neighboring South Dakota, lawmakers in the state House on Thursday gave their approval 37-30 for a constitutional carry measure, forwarding it to the Senate for further review. A similar bill is tracking in North Dakota.

House Bill 246, aimed at enforcement of federal laws prohibiting guns on property managed by the U.S. Post Office in Montana, was scuttled by Bullock over concerns it would violate both the U.S. Constitution’s Property and Supremacy clauses.

“We would not propose to tell the United States Air Force how to run Malmstrom Air Force Base, or for that matter, a private store owner who posts a ‘No firearms allowed’ in their storefront, and the same logic applies here,” wrote Bullock.

HB 246, would have allowed firearms to be stored in vehicles temporarily on post office property while conducting business or carried in areas open to the public while barring state and local police from enforcing the ban.

In recent years, courts agreed the Postal Service’s federal jurisdiction over its often-leased space and “sensitive place” mantra allows for a gun prohibition — even if a visiting patron has a local concealed carry permit.

“It’s disappointing that following a campaign in which Governor Bullock ran on his support for the Second Amendment that he would turn his back on Montanans so quickly by taking his veto stamp to these bills that protect our fundamental rights,” Speaker Knudsen said in a statement.