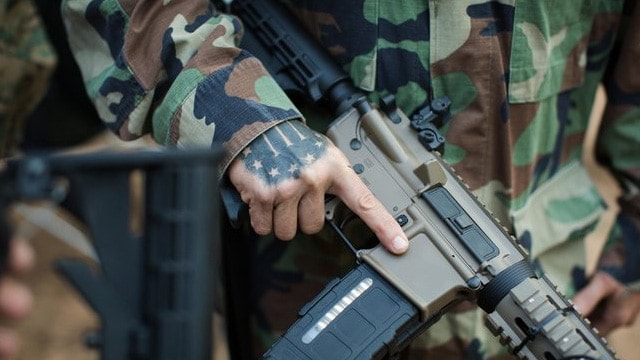 The Three Percenters derive their name from the claim that three percent of colonists fought in the Revolutionary War. (Photo: Kevin D. Liles/New York Times)

A militia group in Georgia reported a rise in membership since the election of President Trump, bucking a national trend among Patriot movement groups.

Militia leader Chris Hill told local media membership for his group, the Three Percent Security Force, has skyrocketed since November, growing from a few dozen to some 400 members, all of them armed and activated.

“The level of violence that I see coming from these protests is alarming, and I think that creates more of a need for people like us,” said Hill, talking about people protesting the president.

Hill’s militia is affiliated with the Three Percenters, a nationwide group with local chapters which vows to “support and defend the Constitution of the United States against all enemies, foreign and domestic” — a line from the oath taken by members of the military. For many in the Three Percenters, and other so-called Patriot movement groups, the right to bear arms is a big part of their lives.

Still, the soaring membership for Hill’s militia goes against the national trend. According to the Southern Poverty Law Center, which tracks such groups, the number of militia groups in the United States saw a 40 percent drop from 2015 to 2016, and several groups “either collapsed or shrank.”

Many Patriot groups supported Trump during the campaign. And now that Trump’s in office, and people are protesting him, Hill said he wants his group’s voice to be heard too.

“We have a duty to protect our freedom, our liberty, our Constitutional republic,” he said. “That responsibility can’t be deferred to, ya know, Congress.”