One man’s plea to Trump: don’t ignore the domestic terror that killed my son 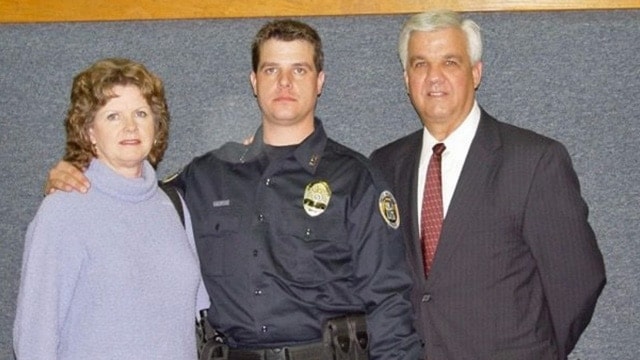 Brandon Paudert, center, with his parents at his police academy graduation in Arkansas in 2003. (Photo: Bob Paudert)

As President Trump focuses federal resources on Islamic terror threats, the father of a police officer shot and killed by domestic terrorists is speaking out and trying to remind the administration that violent extremism can and has been born right here in America.

Former West Memphis police chief Bob Paudert was one of the first people to arrive on the scene when his son, an officer in the same department, was gunned down with an AK-47 in 2010 by a father-son duo who were members of the sovereign citizens movement, he told the Washington Post.

“I found him with the back of his head shot off,” Paudert said of his son. “It was a horrible, horrible scene. I didn’t care about going to work after that. I lost my passion for law enforcement that day.”

According to a 2011 report from the FBI, the sovereign citizens group doesn’t recognize federal, state or local laws – members follow their own set of laws. The report said the group is a “growing threat to law enforcement.” And that’s something Paudert hopes to relay to the Trump administration, as the White House focuses on Islamic extremism.

Earlier this month, Reuters reported that the administration plans to revamp a Department of Homeland Security program. The “Countering Violent Extremism” program would become the “Countering Islamic Extremism” program, and its efforts would focus solely on Islamic terror. Groups like the sovereign citizens, white supremacists, and other extremist groups would no longer be part of the program’s efforts.

Still, Paudert says the trouble started even before Trump. After his son’s death, he started working for the State and Local Anti-Terrorism Training program, teaching officers around the country about threats like the sovereign citizens. Funding for SLATT, which gets its money from the Bureau of Justice Assistance, was cut last year, and 25 instructors lost their jobs. Paudert said no one knew why the Department of Justice decided to stop funding it.

“People don’t realize the individual who ambushed and killed three officers in Baton Rouge last year was a sovereign citizen,” he told The Trace earlier this month. “But for some reason, our government has de-emphasized the need to keep track of sovereign citizens and raise awareness of the movement among law enforcement.”

Paudert said he hopes Trump will do more about the threat of domestic terrorism.

“I know the president says he is going after ISIS, but I’ve never heard anything about what he plans to do the dangerous extremists most likely to kill police,” he said.