Baltimore man gets 10 years for possession of stolen gun 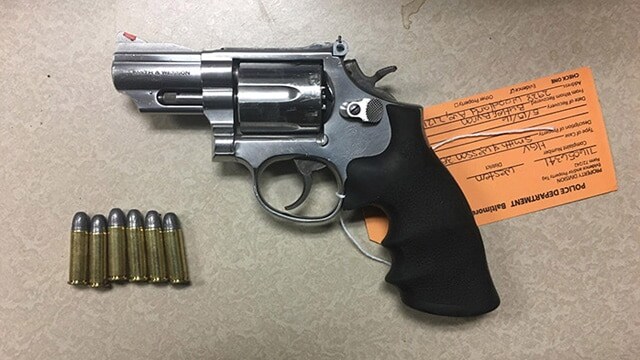 Jerome Herrod, a convicted felon, was found to be in possession of a stolen revolver. (Photo: Baltimore Police Department)

A federal court sentenced a 36-year-old Baltimore man to 10 years in prison for possession of a stolen firearm, the Justice Department announced last week.

Baltimore authorities arrested Jerome Harrod in September 2015 after witnessing him pull a .357 revolver, which they learned was stolen from a Georgia owner in 2012, in front of a house.

According to court documents, detectives surveilling a residence witnessed Harrod walk up to the front porch, pull the silver revolver from his waistband and raise the weapon in the air.

The detective contacted additional detectives for support, gave them a description of Harrod, and asked them to come assist with the investigation. However, as the additional officers arrived on the scene, Harrod took notice of them, again grabbed the gun – which had been put away – then quickly turned and entered the house.

At that point, the officers followed Harrod through the house, to the back door. As Harrod attempted to escape through the back, he again drew his weapon from his waistband and turned toward the officers. However, seeing this, one of the officers yelled, “Gun!” while the other officer struck Harrod in an attempt to keep him from drawing his weapon.

No shots were ever fired and no one was injured. Harrod, who due to prior convictions was prohibited from possessing a firearm, was promptly arrested.

At that time, Harrod was already on a pre-trial release stemming from a different firearm-related offense. Additionally, Harrod was on parole for five separate convictions, which included drug trafficking and armed robbery.