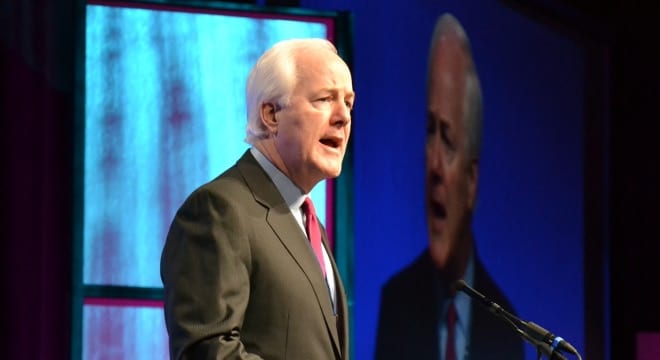 At a meeting of Second Amendment advocates Saturday, Texas Republican U.S. Sen. John Cornyn vowed he will introduce a national concealed carry reciprocity bill in the Senate this week.

While Cornyn’s office has not released a statement on the issue, fellow Senate Republican Roger Wicker of Mississippi, a supporter, noted the measure “would give gun owners the freedom to use their concealed carry permits in other parts of the country, so long as the jurisdiction recognizes the permit as lawful.”

Though beat to the Congressional punch this session by Hudson, Cornyn has long been the GOP’s standard bearer for national reciprocity bills. He sponsored an amendment to a Democrat-backed safe schools bill in 2013 that was rejected. He then proposed a stand-alone legislation in 2015 that picked up 35 co-sponsors, including West Virginia Democrat Joe Manchin, but failed to make its way out of committee.

Should Cornyn be able to count on every Republican in the chamber this time around, as well as Manchin, he would still need to pick up seven more votes from across the aisle to overcome a potential Democrat filibuster.

While Second Amendment groups have hailed such a proposal, citing it will help bridge the often-confusing patchwork of state laws that can leave those traveling while armed in violation of local mandates, gun control advocates argue the move is dangerous.

“I think that would be a mistake,” Vance said at a Manhattan Republican Party event Wednesday night, as reported by the New York Post who seconded the DA’s remarks in a follow-up editorial.

Vance held that strict gun laws in the region, “are a significant part in the rapid and consistent decline in violent crime in New York state and New York City.”