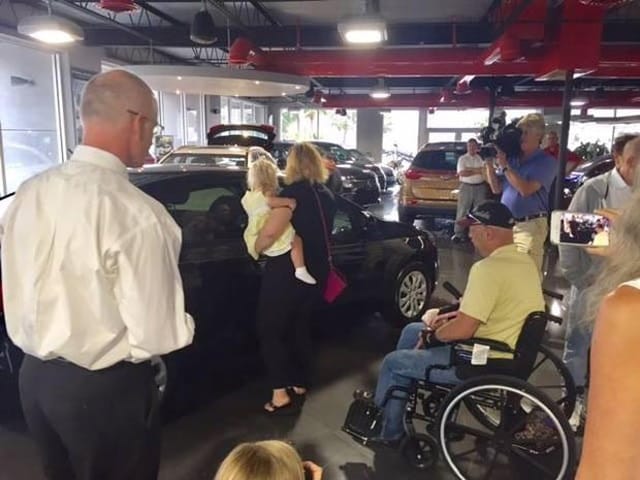 A disabled Navy veteran who was severely beaten by three teens earlier this month when he tried to stop them from torturing a turtle near his apartment complex was given an unexpected surprise last week from a Florida car dealer.

Richard Nisbett, owner of Daytona Beach Kia-Mitsubishi, said he was moved when he heard Garry Blough’s story, so he decided to give him a 2012 Kia Forte.

“Here’s a guy that’s trying to stand up for some defenseless animal and he ends up getting beat up,” Nisbett said. “He was taken to a hospital from a beating that shouldn’t have happened. He had to walk home with his walker — I mean, I just couldn’t take it. I wanted to do whatever I could.”

Blough, who was left with injuries from an explosion during the Gulf War, uses either a wheelchair or walker to get around. Blough explained that since they don’t have a car he; his wife, Jennifer; and their 1-year-old daughter previously relied on public transportation to get where they needed to go, but also admitted that between his wheelchair and his daughter’s stroller, sometimes it was tough. Seemingly simple tasks like going to the grocery store proved even harder.

“There were only so many bags you could carry,” Blough said. “We were weighed down.”

But now, thanks to Nisbett’s generosity, Blough’s family no longer has to ride the bus. Nisbett said Blough became choked up as he handed him the keys and could not have been more appreciative.

“I’ve seen the ugliness this week and I’ve seen the beautiful people come together and help us so much,” Blough said. “It’s great.”