How small businesses are shaping the holster industry 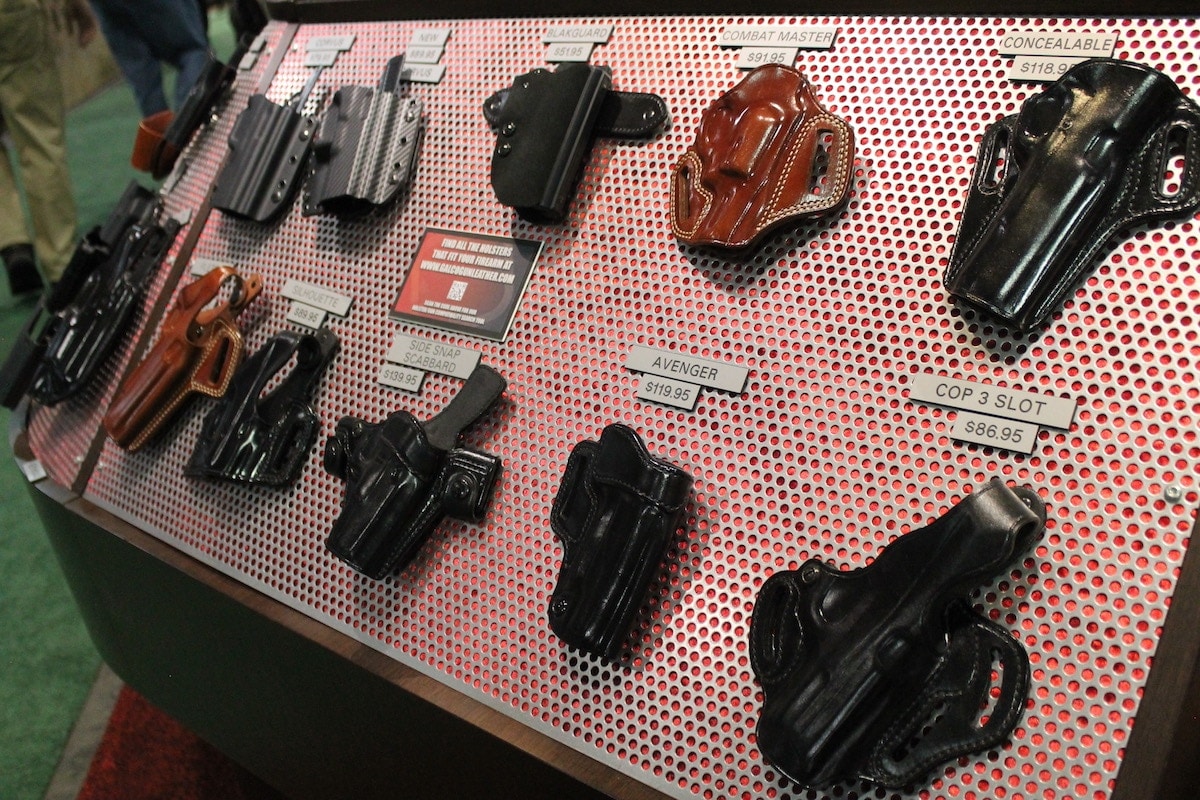 A row of holsters on display at SHOT Show 2017. (Photo: Jacki Billings/Guns.com)

Small businesses are redefining how gun owners carry their firearms, serving up custom builds and a little pizzaz to liven-up open and concealed carry.

How did these ma and pa shops take the carry world by storm and turn dedicated, traditionalists away from black holsters offered by big name dealers?

The shift started a few years ago as Kydex, a rigid yet moldable plastic, made its way to the forefront of the industry.

“Kydex holster making was made popular by simple DIY videos available online, and the fact that just about anyone can start making Kydex from their home kitchen for about $500 to $1,000,” President of L.A.G. Tactical Evan Prive-Shereck told Guns.com in an email.

The cost of Kydex has remained steady over the years, allowing more do-it-yourselfers to try their hand at holster making. As techniques improved and materials once reserved for major retailers were made available to the general public, mom and pop shops began branching out past traditional black designs and providing custom colors, logos and personalization.

“There has been a total shift from everybody wearing a Safariland holster to now all these custom small business companies coming out in the forefront,” said Jessica Hazelaar, owner of Eclipse Holsters. “People don’t want just the black anymore. They want it cool and funky.”

Prive-Shereck thinks the shift comes because consumers no longer want a mass produced holster, but rather variety and a personal touch to their gear.

“There has definitely been a shift away from larger holster manufacturers like Safariland. Companies like Safariland are more focused on making universal holsters that fit most models rather than offer dedicated models for each gun,” Prive-Shereck said. “I believe consumers are choosing to work with smaller companies like L.A.G. Tactical due to the variety available, and the personal service we provide. The attention to detail we give to each customer and put into each holster creates an experience that customers will not soon forget.”

Social media also played a part in the rise of small gear makers. When social media began its reign, gun owners instantly connected for the first time outside of ranges and brick-and-mortar stores. Swapping their custom carry kits online furthered the reach of small businesses.

“Because of social media, I think, there’s this united group of second amendment supporters and everyone’s sharing,” Hazelaar said. “It’s the way everyone operates now — everyone looks to social media as the source to any and all information.”

With millions of Facebook, Instagram and Twitter users at their fingertips, gear makers now have the same access that was once reserved for big-time marketing and advertising agencies. This access means small businesses can focus on generating innovative products instead of paying advertisers or agencies.

“If small companies like ours create quality content, it can reach hundreds of thousands of people with only a tiny budget behind it,” Lisa Looper, founder of Flashbang Holsters, told Guns.com in an email. “Smaller companies don’t have the marketing budgets to put huge ads in national publications, so they’re looking for creative ways to meet their customers. Social media and the internet have become the great equalizers.”

Women, who the National Shooting Sports Foundation concluded is one of the fastest growing segments in the industry, have also been a driving factor in the rise of custom holster makers.

Eclipse Holsters’ male customers continue to outnumber the female base, but Hazelaar said there’s definitely been an uptick in women on the hunt for holsters and gear.

“There’s no hesitation in saying women love custom,” Hazelaar emphatically said. “If you can get it in tiffany blue carbon fiber or take (the holster) and match the pink in your gun to it … absolutely. We’re going to make it look amazing all the way down to what color rivet you want.”

Beyond color and personalization, women are also discovering that the holsters most readily available at major retailers are geared towards men’s bodies and don’t address the specific needs female concealed carriers face when pairing carry gear with women’s clothes.

“Women have unique challenges when it comes to strapping a chunk of metal to our bodies. What’s easy as pie for the average man, is beyond complicated when you look at the variety of clothing women typically wear,” Looper said. “People are looking for a concealed carry solution that works with their lifestyle, and like anything else, they want something that appeals to them!”

Though there are a bevy of makers now coming to the table, it seems there’s enough room for everyone.

“There’s so many holster makers rising and we don’t even affect each other in the least … no one is stepping on anyone’s toes because that’s how huge this market is,” Hazelaar told Guns.com.

Looper said the community’s diversity creates the capacity to coexist.

“It seems like most of the smaller holster companies have their own little niche in the market,” Looper said. “Some focus on the art of the holster, some on a particular functionality. Others jump on trends in the industry — anyone remember that zombie green craze?”

Even Safariland, a gear powerhouse, agrees that there’s plenty of room in the industry even for the little guys.

“Competition is always good for the market, and as the holster category continues to expand, this benefits everyone,” the Safariland Group said in an emailed statement to Guns.com.

While these little gear makers will never push the high volume numbers that Safariland does, they’re keeping the American dream alive one holster at a time.