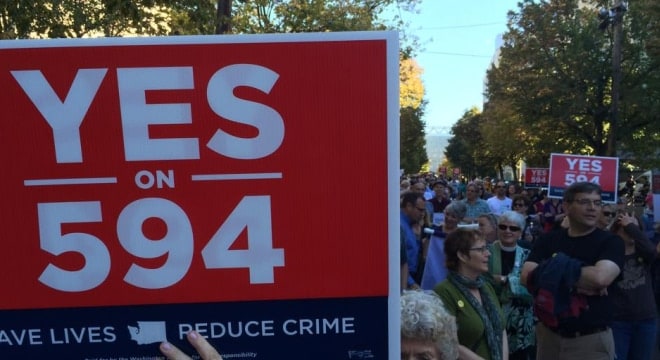 A 2014 ballot initiative which expanded background checks in Washington is getting a slight remodeling by state lawmakers this session. (Photo: Alliance for Gun Responsibility)

A Senate bill making several changes to Washington’s voter-approved I-594 ballot referendum on universal background checks is headed to the House.

The measure, a substituted version of SB 5552, aims to make a series of modifications to the state’s two-year-old background check mandate. It passed the Senate on Feb. 23 by unanimous vote.

The bill would expand temporary transfers under the law and add in-laws to the list of immediate family members exempted from person to person gun loans. Further, the measure adds exceptions for some curio and relic swaps between collectors and transfers for work such as between security guards and their employers. In cases of potential suicide prevention, a hot-button issue in Washington, the proposal adds an exception for temporary transfers to prevent self-inflicted bodily harm.

Finally, SB 5552 clarifies that flare guns and construction tools are not covered by the background check requirement, a lingering concern.

The controversial and at times confusing I-594 universal background check ballot initiative was passed by voters in 2014, with broad support from urban Seattle-Tacoma areas. Fronted by the Alliance for Gun Responsibility and backed by $10 million from national gun control groups and billionaire philanthropists, the measure navigated its way to victory at the polls and shrugged off legal challenges from gun rights advocates.

Last October, the law saw its first prosecution after a man was charged with unlawful transfer of a pistol that was used in the murder of a 17-year-old two days later. The individual who was sold the firearm was 19 at the time of the transfer and unable to buy a handgun under federal law due to his age. Supporters of the law argue I-594 has resulted in at least 144 private sales being declined by the FBI since taking effect.

Second Amendment groups welcomed passage of SB 5552. “While this bill is not a complete fix of everything we’ve outlined as problematic with the I-594 firearms transfer law, it is an important start for bipartisan cooperation on Second Amendment civil rights issues,” said Firearms Policy Coalition Legislative Advocate Philip Watson in a statement.

The measure has been referred to the House Judiciary Committee. Also, before the committee is proposed legislation, HB 1380, by Rep. Matt Shea, R-Spokane Valley, that would repeal the I-594 background check expansion altogether.