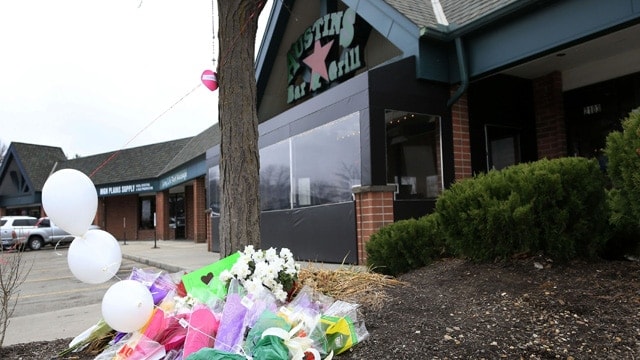 A small memorial for Srinivas Kuchibhotla is displayed outside Austins Bar and Grill in Olathe, Kan., on Feb. 24, 2017. (Photo: Orlin Wagner/AP)

Gays Against Guns described the bar-room attack on two Indian men and a bystander who tried to intervene as the result of the NRA’s “guns everywhere” agenda and Trump’s xenophobic rhetoric.

Authorities identified the gunman as 51-year-old Adam W. Purinton, who fled the scene on foot and was later apprehended at an Applebees in Missouri, The Kansas City Star reports. He is charged with first-degree murder and attempted murder and is awaiting extradition back to Johnson County, Kansas.

Several witnesses told investigators they heard Purinton yell “get out of my country” before firing, the newspaper reports.

“Kuchibhotla and Madasani’s tragic deaths are the direct result of the NRA’s state-by-state push for looser gun laws and Trump’s xenophobia,” Gays Against Guns said in a blog post Friday. “Trump has yet to make a formal statement about the incident or even extend a gesture to the Prime Minister of India. WE CAN stop the Concealed Carry Reciprocity Act of 2017.”

The Trump administration told Reuters it was “absurd” to link the tragedy to the president’s rhetoric.