Rifle use on the rise among Chicago gangs 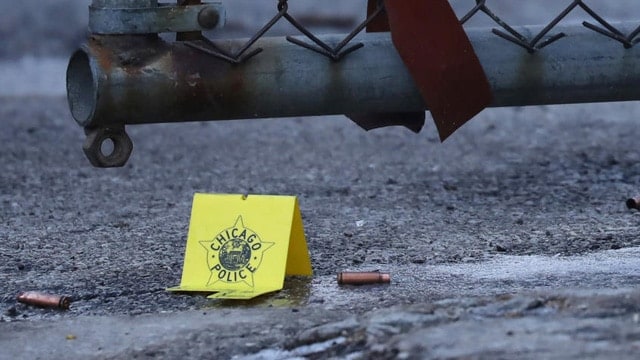 Rifle casings at a crime scene in the Back of the Yards neighborhood in Chicago earlier this year. (Photo: E. Jason Wambsgans/Chicago Tribune)

Semi-automatic rifles are being used in more and more gang shootings, according to the Chicago Police Department.

AR- and AK-style rifles have been used in 33 shootings in the last nine months, the Chicago Tribune reported. At least 46 people were shot in those attacks, 13 of them fatally.

The frequency of rifle related shootings rose steadily towards the end of 2016. There were three rifle shootings in October, six in November and nine in December.

According to data collected by the Federal Bureau of Investigation, homicides with rifles are rare. In 2015, there were 252 incidents in which a rifle was used to commit murder, down marginally from the year before and 24 percent from 2011.

Police say the weapons are continually used in only two neighborhoods — Back of the Yards and Brighton Park — both on the city’s Southwest Side. They suspect four Hispanic gangs are using the weapons. Two of them — La Raza and the Almighty Saints — have been fighting for decades. The Gangster Two-Sixes and the Satan Disciples are also suspected of consistently using the rifles.

The guns have been used in shootings outside elementary schools, churches and day care centers during afternoon and evening hours. At least three rifles have been recovered by police.

Over the years, the weapon of choice for gang members in Chicago has shifted from the revolver to the handgun. Rifles were used consistently about a decade ago during an extended fight between the New Breeds and the Traveling Vice Lords on the West Side, according to the Tribune. Officers were allowed to use semi-automatic rifles after a man armed with an AK-47 almost shot two officers.