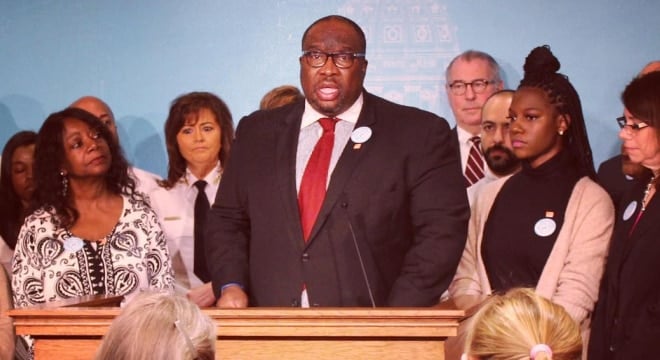 State Sen. Jeff Hayden joined legislators and gun control advocates on Feb. 23 to unveil legislation in honor of his late sister, Taylor, on what would have been her 26th birthday. (Photo: Minn Senate DFL)

Democrats in the Minnesota Senate have introduced a measure that would grant public funds to organizations recognized for their work on gun control efforts.

The legislation was proposed by state Sen. Jeff Hayden after his sister was fatally shot while being used as a human shield during a suspected drug deal. The Minneapolis area lawmaker sees gun violence as a public health epidemic and feels funding outreach efforts can help save lives.

“What I’m hoping that this will do will be the start of a new conversation that really talks about what happens with gun violence and other ways that we can deal with our issues rather than shoot each other,” said Hayden at a press conference on Feb.23, what would have been his sister’s birthday.

Hayden’s legislation, SF 1263 and its House companion, HF 1678, are cited as the Taylor Hayden Gun Violence Prevention Act. Under the current language, they would direct the state commissioner of human services to develop an awards process for $200,000 in annual grants for which non-profit gun violence organizations could apply.

Hayden and other state lawmakers were joined at the conference by members of Everytown for Gun Safety and Moms Demand Action. Lucy McBath, whose son Jordan Davis was killed in Florida in 2012, was on hand as the organization’s faith and outreach leader.

“Senator Hayden’s family has also suffered unimaginable loss,” said McBath in a statement. “Their strength, and the strength of the other survivors here today, is an inspiration to all of us, and I’m honored to join them in the fight to bring common-sense solutions to Minnesota.”

Gun rights advocacy groups sympathized with the Hayden family but rejected the proposal as a waste of public funds.

“We were sorry to hear of the loss that Senator Hayden’s family has suffered with the tragic murder of his sister last year,” said Bryan Strawser, chairman of the Minnesota Gun Owners Caucus. “However, what was proposed last week is more of the same tired old gun control strategies of the past brought out from the same groups, with the same messaging, and the same falsehoods.”

Both measures have been referred to their chamber’s respective human services committee.