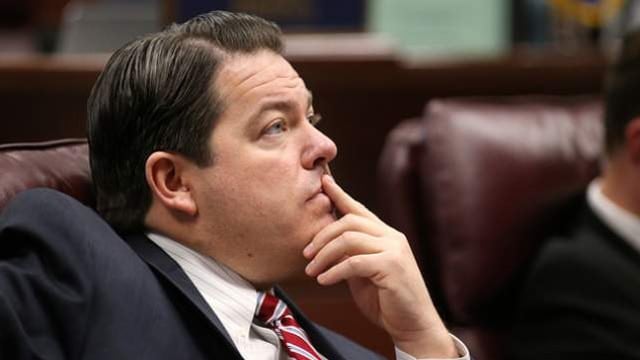 Senate Minority Leader Michael Roberson, R-Henderson, and Sen. Donald Gustavson, R-Sparks, both questioned the necessity of the ban outlined in SB 115 during a Senate Judiciary Committee hearing Tuesday as defenders of the bill called it a matter of public safety.

“I’m not quite sure this bill is needed,” Gustavson said. “As far as I know there’s no evidence to suggest open carry or concealed carry pose any danger. I’d just hate to create another gun free zone.”

“I’m concerned that we are telling the public that we are creating gun free zones,” Roberson said. “This bill undermines law-abiding Nevadans right to bear arms in this state and number two, actually endangers the public by making public libraries a more attractive place for the criminal element to come. So I want to see adequate security at these libraries.”

The proposal, a joint effort co-sponsored by Clark County Democrats Sen. Moises Denis and Assemblywoman Shannon Bilbray-Axelrod, would authorize libraries to preempt state law and ban weapons outright — an exemption so far only given to schools, colleges and daycares.

Denis and Bilbray-Axelrod served as library trustees before becoming state lawmakers and both agreed libraries function as “extensions of the education establishment.”

The “original bill” Denis referred to, SB 175, delineates the power of regulating firearms solely to the state Legislature.

“I didn’t bring this because of Judge (Stefany) Miley,” he said.

The litigation stemmed from the district’s treatment of a woman who openly carried while visiting a public library with her three children in March 2016.

According to court documents filed in April, Las Vegas Metropolitan Police cited Michelle Flores for trespassing at the Rainbow Library after she refused to leave in protest of the building’s ban on weapons like the .38-caliber revolver she wore in a visible holster that day. The library also revoked her privileges for one year, prompting Flores to file suit in district court accusing the library of limiting her constitutional rights to free speech and bear arms.

The library district’s attorney, Dennis Kenney, said the ban wasn’t about Flores’s gun, but rather her “disruptive behavior.”

The district also maintained the Legislature’s pre-emption law, which prohibits local gun regulations over and above state law, only applies to counties, cities and towns. Libraries, rather, fall into a category of “political subdivisions” that include schools and judicial districts, all of which are distinctly different from the former, the district argued.

Kenney appeared before the committee to reiterate Judge Stefany Miley agreed with the district’s interpretation of the law.

When pressed on whether the district believed it was following the law by prohibiting openly carried and concealed carry weapons, Las Vegas-Clark County Library District Director of Development Danielle Milam told the committee “yes.”