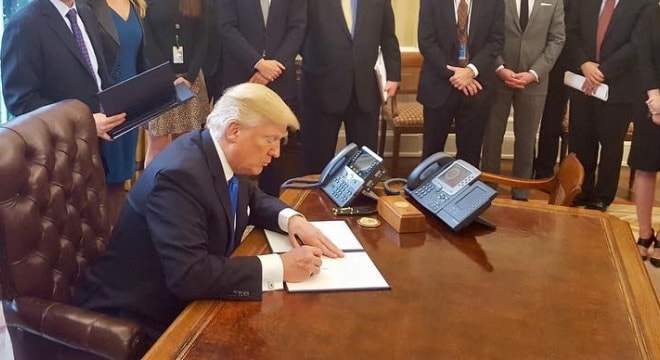 Republican President Donald Trump signed a repeal of the Social Security Administration rule on record submission to the FBI for some disability recipients. (Photo: Whitehouse.gov)

President Donald Trump on Tuesday gave his signature to a Republican-backed resolution reversing a pending rule change that would bar some Social Security recipients from possessing firearms.

The measure passed the House 235-180 and the Senate 57-43 last month before landing on Trump’s desk and shortcuts implementation of a plan that would have seen an estimated 75,000 beneficiaries with certain mental health diagnoses lose their gun rights annually.

Trump signed the resolution along with other bills without comment. Lawmakers utilized the Congressional Review Act, which allows a new Congress to scrap regulations and laws implemented in the last 60 legislative days of the outgoing administration, to expedite action on the proposal.

The now-repealed rule, published in the Federal Register last December, would have identified certain individuals receiving benefits to be reported to the FBI’s National Instant Criminal Background Check System, the database federal firearms licensed dealers use to determine whether a prospective buyer is eligible to buy firearms and/or explosives. This would effectively have made them prohibited firearms possessors. Compliance was not required until Dec. 19, 2017, with new disability applicants screened after that date and those already in the system checked on their next regular renewals.

The NICS database currently has 4.7 million active records in their index of individuals reported for mental health reasons as of Jan. 31 that were not affected by the repeal.

U.S. Sen. Chris Murphy, D-Conn., joined with gun control groups to decry the move, arguing it weakens the background check database. “Republicans always say we don’t need new gun laws, we just need to enforce the laws already on the books,” said Murphy in a statement released through Everytown for Gun Safety. “But the bill signed into law today undermines enforcement of existing laws that Congress passed to make sure the background check system had complete information.”

Gun rights advocates welcomed the action from the White House, with the National Rifle Association calling the pending Obama-era rule a dangerous overreach by government.

“Today marks a new era for law-abiding gun owners, as we now have a president who respects and supports our right to keep and bear arms,” said Chris W. Cox, executive director of the NRA’s Institute for Legislative Action in a statement.