2 charged with murder after accomplice killed in botched robbery 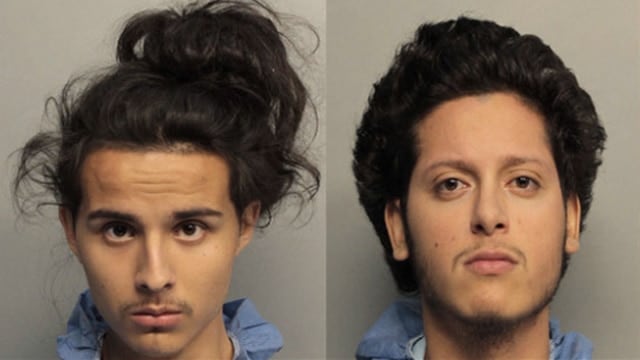 Two Florida teens are facing murder charges after their accomplice was shot and killed during a botched armed robbery over the weekend in Miami.

Authorities say the third suspect, 18-year-old Alberto Medal, was killed when a good Samaritan witnessed the robbery unfold and fired at the three suspects. According to Miami-Dade County Corrections, Marcel Antonio Bolanos, 19, and Steven Palacio, 19, are both charged with second-degree murder and are held without bond.

The robbery unfolded around 11:30 p.m. Friday when the victim was walking and approached by Medal, Bolanos, and Palacio. The trio announced a robbery and took the victim’s belongings at gunpoint.

However, another man, who was also armed, witnessed the robbery and fired at the suspects in an apparent attempt to stop the crime in progress. Medal was struck by gunfire.

The three immediately fled from the scene and went to an area hospital to get medical treatment for Medal, who died a short time later.

Bolanos and Palacio were apprehended Sunday. In addition to murder, they were both charged with attempted robbery and robbery with a deadly weapon. Palacio was also charged with burglary, theft, and resisting an officer.

But apparently, the armed citizen also left the scene and authorities have not yet been able to identify or locate him. Speaking with reporters, Lt. Freddie Cruz with the Miami Police Department pleaded with the good Samaritan to come forward. Cruz confirmed that, at this time, he is not facing any charges and authorities simply wish to question him about the robbery. Police are also asking anyone else who may have witnessed the crime to come forward as well.