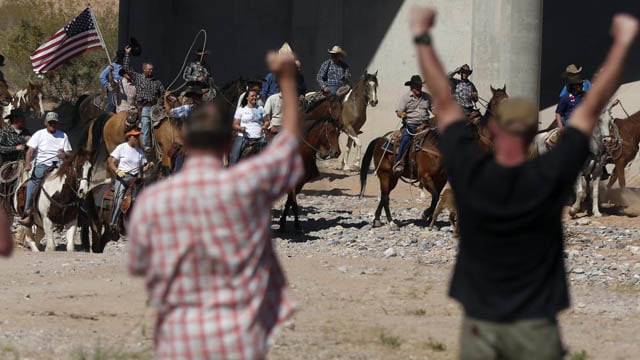 A Bureau of Land Management ranger testified Tuesday that he stopped a recording on his body camera during the armed standoff in Nevada in 2014 just as authorities started to fear a gunfight.

“It’s gonna get Western,” Patrick Apley could be heard saying in the body camera footage before he stopped recording, according to the Las Vegas Review-Journal. Prosecutors played the video Tuesday in the trial of six men charged with conspiracy, obstruction of justice, assault, and other charges for their role in the six-day standoff between armed protestors and law enforcement.

“I was mad,” said Apley, talking about the April 12 incident in which tensions reached a near boiling point. “I felt like we were going to be in a firefight, and I really didn’t want to record that.”

The defense didn’t like that answer. “What’s the purpose of having a body camera?” asked Jess Marchese, a lawyer for Eric Parker, one of the six men on trial.

“The purpose of a body camera is to record the incident, however, I was under a lot of stress at that point and I just didn’t want to continue with all that,” said Apley.

In direct examination, Apley told First Assistant U.S. Attorney Steven Myhre that he and other agents spent between 10 to 15 minutes behind a pickup truck with their weapons drawn. Asked to rate the threat level of that moment from one to 10, Apley put it at “about a 7.” He said it compared to his combat days.

The rangers were there to round up Cliven Bundy’s cattle as payment for $1 million in 20 years of back grazing fees. Apley and the other BLM rangers eventually left the area, abandoning the operation without any shots being fired. Apley said protestors were “flipping us off, telling us to go home” as they left.

“I’m more aware of my surroundings now,” he said, when asked about how the incident affected his job. “I’m a little bit more leery of people carrying guns, and how they’re carrying guns.”

The trial, in its third week, is one of three for 17 people involved in the so-called “Battle of Bunkerville.” Defendants say their protest was peaceful, and the federal agents were the ones ratcheting up tensions. Prosecutors say the Bundy family and others deceitfully recruited people “for the unlawful purposes of interfering with impoundment operations.”

The six men in the initial trial include Oklahoma defendant Richard Lovelien, Arizona defendant Gregory Burleson, and O. Scott Drexler, Todd Engel, Eric Parker and Steven Stewart of Idaho. Cliven Bundy will be tried in May, along with his sons Ryan and Ammon Bundy, as well as two others. The six remaining defendants are expected to be tried in August.