Former SEAL Ryan Zinke confirmed as Secretary of the Interior 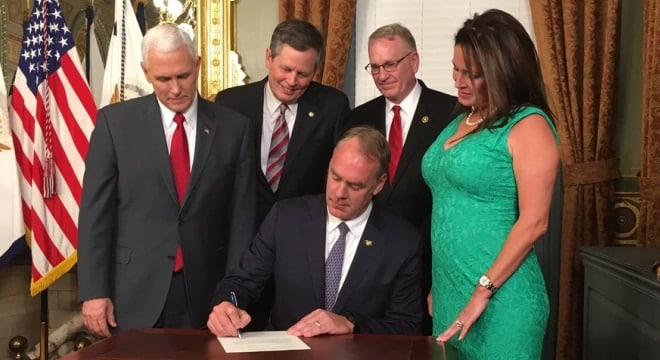 Zinke was sworn in by Vice President Mike Pence at a ceremony in the Eisenhower Executive Office Building after his confirmation Wednesday. (Photo: DOI)

The U.S. Senate on Wednesday in a bipartisan vote approved the cabinet appointment of Montana Republican Congressman Ryan Zinke as the 52nd Secretary of the Interior.

Zinke, a retired Naval special warfare officer who came to Congress in 2015, was confirmed in a bi-partisan 68-31 vote this week and will be both the first Montanan and first SEAL in a Presidential Cabinet. Sworn in by Vice President Mike Pence at a ceremony in the Eisenhower Executive Office Building, Zinke invoked the spirit of President Theodore Roosevelt.

“I shall faithfully uphold Teddy Roosevelt’s belief that our treasured public lands are ‘for the benefit and enjoyment of the people’ and will work tirelessly to ensure our public lands are managed and preserved in a way that benefits all Americans for generations to come,” said Zinke in a statement.  “This means responsible natural resource development, increased access for recreation and sportsmen, and conservation that makes the land more valuable for our children’s children.”

A member of the president’s Cabinet who stands eighth in line of succession just behind the attorney general, the chief of the Interior Department oversees the Bureau of Land Management, U.S. Fish and Wildlife Service, Bureau of Indian Affairs and the National Park Service, among others. As such, they are responsible for some 20 percent of the land in the country, a budget of $11 billion and over 70,000 federal employees.

Zinke spent much of his 23-year military career in the SEAL community and retired as the dean of the Naval Special Warfare graduate school. He has been Montana’s sole representative to the House for the past three years, winning an easy re-election in 2016, and has been the co-sponsor of several pro-gun and pro-hunting bills.

Not all felt Zinke was the man for the job, however. The top Democrat on the Senate Energy and Natural Resources Committee, U.S. Sen. Maria Cantwell, D-Washington, voted against his confirmation both in committee and on the final floor vote.

“Unfortunately, I’m not convinced that Congressman Zinke will be able to moderate the Trump administration’s extreme views on exploiting our public lands,” said Cantwell. “I’m not sure he will be able to stand up to the president and protect the public interest … required to manage our public lands for the benefit of all Americans—not just the oil, gas and mining companies and their commercial interests.”

One gun-related topic in Zinke’s wheelhouse will be the controversial directive made by the outgoing Obama-era U.S. Fish and Wildlife Service administrator to require the use of “nontoxic ammunition and fishing tackle to the fullest extent practicable” on lands and waters controlled by the agency by January 2022.

The measure was designed to prevent lead contamination in animals and habitats, but gun rights advocates, conservation officer associations and hunting industry trade groups questioned the timing of the order and argued it could have damaging economic ramifications.

“The confirmation of an avid outdoorsman to lead the U.S. Department of the Interior marks the end of a hostile era toward hunters and sportsmen,” said Chris W. Cox, executive director of the National Rifle Association’s Institute for Legislative Action, who supported Zinke’s nomination. “The NRA looks forward to working with Secretary Zinke in the pursuit of true conservation that respects the rights of America’s outdoorsmen and women.”

Zinke submitted his resignation from the House to Montana’s Gov. Steve Bullock (D), who congratulated the outgoing lawmaker and called for a special election May 25 to fill his seat.