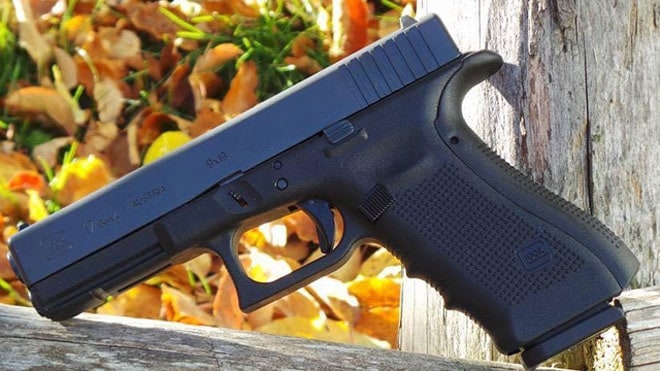 A Glock 17 with lovely foliage in the background. (Photo: Glock via Facebook)

Gun maker Glock opened a protest bid with how the government awarded a new pistol contract to competitor Sig Sauer, according to documents filed last week with the Government Accountability Office.

Glock filed the protest against the U.S. Army a week after receiving a debriefing about why it did not win the award, the U.S. Army Materiel Command told Guns.com in a statement.

Although the complaint complicates the Army’s plans for testing the new handgun system, it does not delay them. Under normal circumstances it would have temporarily suspended the contract, but Glock failed to file within the allotted timeframe permitted by federal law.

“Glock’s protest to the GAO is timely but was not filed within five days of receiving their debriefing meaning that under the Competition in Contracting Act, Sig Sauer can continue contract performance during the pendency of the protest,” the Command said.

The Command’s protest litigation branch is defending against the complaint and expects the GAO to decide on the matter by June 5.

The iconic gun maker’s complaint comes a month after the military named a Sig pistol as its new official sidearm. The award affords the recipient bragging rights on top of an extended contract valued at $580 million.

For more than 25 years, the U.S. military contracted Italian gun maker Beretta for manufacturing the M9 pistol, but for several years had been teasing the idea of picking up a more modern and modular design, of which Glock set the precedent.

Since breaking out in the 1980s, Glock provides handguns for 65 percent of all police departments in the U.S. The company also now supplies guns to military and law enforcement in 48 countries, and to civilian markets in more than 100.

Last summer, the Federal Bureau of Investigation renewed a contract with Glock valued at $85 million. While the company would supply new 9mm handguns to the FBI, under the contract it would also supply weapons for other law enforcement agencies within the Justice Department and federal government.