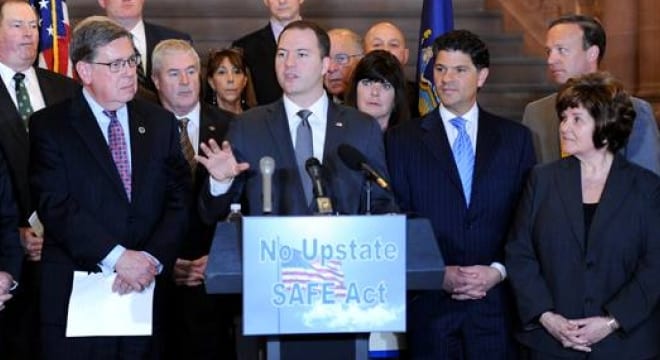 A collection of New York legislators and gun rights advocates gathered Wednesday in support of a move to restrict the SAFE Act to Gotham. (Photo: Sen. Rob Ott)

A group of upstate lawmakers are backing a proposal to let New York City keep the state’s restrictive new gun laws while repealing them for the rest of the Empire State.

The move, introduced as companion bills in the state Senate and Assembly, would scrap the 2013 SAFE Act in all but the counties encompassing the five boroughs of New York City.

“New York City plays by its own rules on so many issues,” said state Sen. Rob Ortt, R-North Tonawanda, at a press conference Wednesday. “It has its own regulations when it comes to ride-sharing services and minimum wage increases, so it only makes sense to let New York City progressives keep the SAFE Act and reform the law everywhere else.”

Ortt’s legislation, S 879, would limit the SAFE Act’s applicability to Kings, Queens, Richmond, New York and Bronx counties. The other 57 counties in the state would revert to the gun laws on the books prior to Gov. Andrew Cuomo’s signing of the act in response to the Sandy Hook School shooting in Newtown, Connecticut.

Should the proposal pass as written, the counties affected by the planned repeal would be exempt from the pending five-year re-certification requirement on pistol permits, and would not have to participate in the pending ammo, licensing, and permitting database. Further, new post-SAFE Act assault weapon mandates and mental hygiene law changes would not apply.

Approximately half of the 150 seats in the New York State Assembly and 63 Senate districts are held by representatives from the five boroughs. Lawmakers from the urban center have traditionally sponsored increased firearms regulation.

On the other end of the spectrum, upstate New York counties have historically chafed at the regulations of the SAFE Act, with area lawmakers voicing their opposition to the state in mostly symbolic ways since its passage.

Currently, 42 counties have submitted resolutions to Albany, pulling their official logos from supporting SAFE act documentation, according to a list by NY SAFE Resolutions, a website dedicated to compiling information about the law’s opposition.

Gun rights groups including the New York State Rifle and Pistol Association and the Shooters Committee on Political Education were on hand this week to lend their support to the repeal.

“Senator Ortt is taking the right steps to repeal the unconstitutional Safe Act. An Act passed in the dark of night that proved to be an example of government at its worst,” said SCOPE’s Lynne M. Johnson. “We must protect our right to keep and bear arms and not allow any infringement on this right.”

The bills are currently under review by the Senate and Assembly codes committees.