Report: Guns assembled in UK may be finding their way to child soldiers 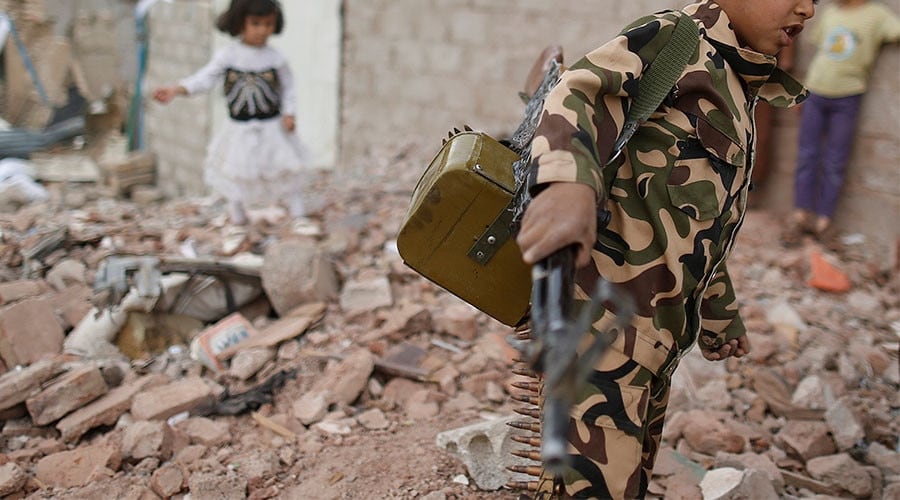 Firearms assembled in the United Kingdom could be getting into the hands of child soldiers, a report by European children’s charities has warned.

The report — entitled “Small Arms in the Hands of Children” — accuses German arms manufacturer Heckler & Koch (H&K) of bypassing export roadblocks in Germany by using subsidiaries in the U.K. It was authored by Terre des Hommes, Brot für die Welt, Kindernothilfe and the German Coalition to Stop the Use of Child Soldiers.

According to the report, H&K and another German arms manufacturer Sig Sauer use their U.K. and U.S. operations when German politicians and export guidelines block exports to conflict regions.

The authors of the report cite cases including H&K’s attempted exportation of thousands of firearms to Nepal in 2000-2001 during a period of civil war.

“When it became obvious that Germany would deny such an export deal due to public pressure because of the ongoing civil war, Heckler & Koch quickly applied for an export license for 6,780 rifles in Great Britain, which was then granted,” said the authors.

“In the end, it remains unclear if and how many rifles were exported. But even if this deal didn’t manifest itself, it nevertheless illustrates how useful such foreign subsidiaries can be.”

The authors claim H&K and Sig Sauer produced weapons that have been used in Syria, Yemen, Iraq, the Philippines and Columbia. All of those countries have documented cases of child soldiers.

The report also says H&K and Sig Sauer factories in the U.S. have made it possible for the companies to sell guns to Columbia.

The Guardian reports British organization The Campaign Against Arms Trade has called out the British government for what it calls a lack of transparency and “a mindset of a government that has always put arms exports ahead of human rights.”

A spokesperson for the CAAT said: “The UK government always claims to have one of the most rigorous and robust arms export control systems in the world, but in reality it does everything it can to support companies like Heckler & Koch that arm some of the most repressive and unstable regimes in the world.”

In reply, a spokesperson for Britain’s Department for International Trade said: “The government takes its arms export responsibilities very seriously and operates one of the most robust export control regimes in the world.

“All export license applications are assessed on a case-by-case basis against the consolidated EU and national arms export licensing criteria. Our export licensing system allows us to respond quickly to changing facts on the ground. We have suspended or revoked licenses when the level of risk changes, and we constantly review local situations.”

Ralf Willinger of Terre Hommes, one of the charities that authored the report, hopes their findings about child soldiers can shed light on some of the often overlooked consequences of the global arms trade.

“When you bring [child soldiers] up … German MPs do then see that the arms trade and support to those countries is problematic,” said Willinger. “If you just say these are exports going to a war zone, or to Saudi Arabia, that doesn’t necessarily mean MPs find it problematic – but when it becomes clear that these are children with German guns, then it is something that they don’t want to happen.”

In May of 2015, the German government reported that Saudia Arabia — a country that in 1969 and 2008 was sold licenses to manufacture H&K assault rifles — had been selling H&K rifles to Yemen militias. On Tuesday, the office of the UN High Commissioner for Human Rights verified that more than 1,400 children had been recruited to fight in the Yemen conflict.

The report does note that German firearms exports should have “end user certificates,” which are meant to prevent buyers from giving the weapons to other parties. However, Germany has no legal way to issue sanctions if buyers violate those certificates.

A spokesman for the German economy ministry told the Guardian that German export policies are some of the strictest in the world and have been tightened even further in recent years, as in 2015 the ministry banned the sales of licenses to countries that are not in the European Union or Nato.

“Such license approvals in particular made it difficult to control whether weapons ended up in children’s hands,” he said.

The ministry spokesperson also pointed out that Germany and the UK operate in accordance with an E.U. “common position” that theoretically should prevent deals with countries in which children are being armed. However, the position is not legally binding and the report suggests companies can work around those roadblocks by simply applying for export licenses in different countries.

According to the Guardian, H&K and Sig Sauer did not reply to requests for comment.