The definition of 'pellet gun' to Indian police is very different 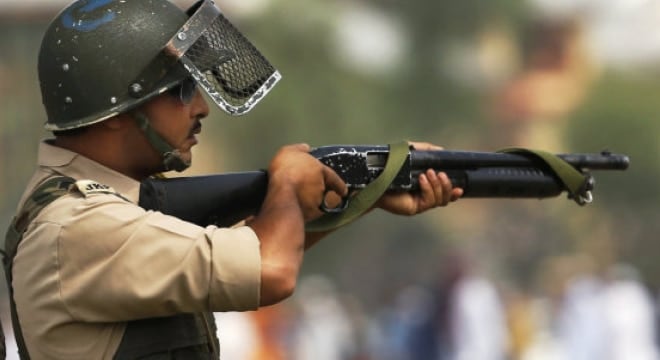 “An Indian policeman aim his pellet gun at protesters during a protest in Srinagar, India” (Photo and caption: AP)

Riot police in India have long held they use what are described as “pellet guns” as less-lethal weapons against crowds. Turns out it’s just a 12 gauge shotgun loaded with low brass birdshot.

The New Indian Express, a daily newspaper which dates back to 1932 and has a daily circulation of about 300,000, did some digging into the claims made by the Central Reserve Police Force on their use of pellet guns in crowd control.

While the typical pellet gun conjures up images of offerings by Daisy, Marksman and Crosman chambered in .177, the definition as applied by the CRPF is a skosh more flexible.

“The correct term is a ‘12-bore shotgun’ that fires very small shots like fine ball bearings of lead. Each no. 9 cartridge that CRPF uses in the Kashmir Valley holds about 485-500 shots,” explains the paper.

Other Indian media organizations noted the shotguns are made locally by the Jabalpur Ordinance Factory (JOF), have been in use since 2010 and have caused at least 10 deaths. The guns were introduced after large scale riots in the volatile Kashmir region where authorities contend Pakistani radicals are inciting unrest.

The Express notes that police shotguns were equipped with a “‘deflector’ fixed to the muzzle  — just like the visor of a baseball cap” to channel the shot more effectively. This sounds similar to the “Duckbill” choke used by the U.S. Navy SEALs and others in Vietnam, of which replicas are available.

However, it seems the Indian deflector, which in this case is supposed to keep the shot from rising above waist-level on a target, leaves much to be desired due to basic geometry and physics.

“Even if you aim at the ankle of a protester and your barrel moves by two degrees,  you could still shoot a six feet tall man in the head. When you are firing pellets, it means that a very substantial number of shots would hit the upper part of the body,” notes an officer.