TSA: Record number of guns found in one day 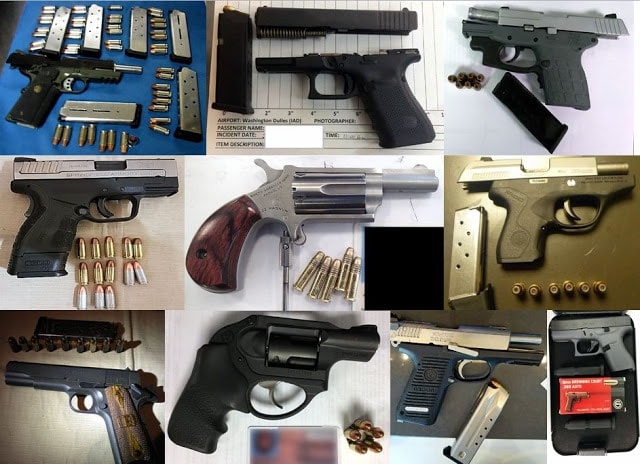 TSA discovered 79 firearms in carry-ons at their checkpoints last week including 21 last Thursday alone– a one-day record for the agency. (Photo: TSA)

The Transportation Security Administration announced Wednesday the 2014 single-day record for the number of firearms discovered in carry-on bags across the country has been broken.

TSA screeners found 21 guns in traveler’s bags on Feb. 23, breaking the standing record of 18 set almost three years ago. In all, the agency tasked with protecting travelers in the nation found 79 firearms last week as well as a live smoke grenade, a stun cane, and replicas of a suicide vest and claymore mine.

Of the 79 guns collected last week, 68 were loaded and 21 had a round in the chamber.

“Unfortunately these sorts of occurrences are all too frequent which is why we talk about these finds,” notes the agency on their blog. “Sure, it’s great to share the things that our officers are finding, but at the same time, each time we find a dangerous item, the line is slowed down and a passenger that likely had no ill intent ends up with a citation or in some cases is even arrested. The passenger can face a penalty as high as $11,000. This is a friendly reminder to please leave these items at home.”

The agency suggests travelers brush up on the proper way to travel with firearms and cautions to never pack ammunition or any gun parts in carry-on luggage.