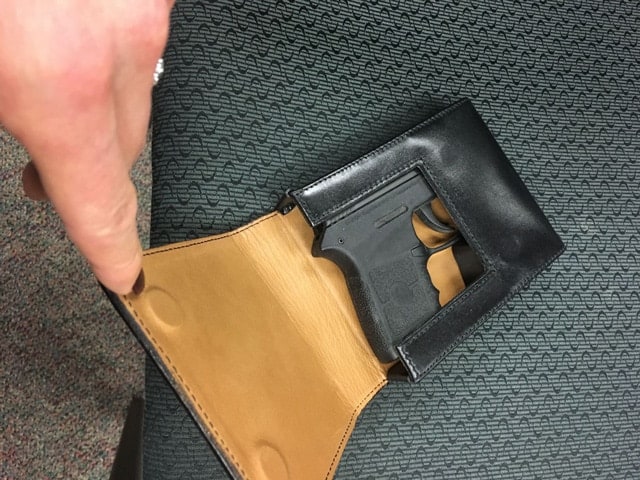 A semi-auto pistol in a holster left behind by state Sen. John Cosgrove.

A Republican senator from Chesapeake accidentally left a holstered handgun behind in his seat after a meeting with the Virginia General Assembly last week.

Sen. Jennifer T. Wexton, D-Loudoun, was the one who discovered the weapon. Wexton thought the holster was a wallet, but when she opened it to find an ID, she instead found a handgun.

Within about 20 minutes, the gun was returned to its rightful owner, Sen. John A. Cosgrove Jr., a member of the General Assembly for 15 years, who was pitching a bill on vehicle safety inspections during the meeting.

The 62-year-old retired naval officer initially declined to comment on the incident, but later explained that the holster was new and he had not worn it correctly, clipping it to his pants instead of his belt.

“It just basically came off and my colleagues picked it up and brought it right back to me. And that was it. No bullet in the chamber. Safety was on,” Cosgrove said, adding that he learned his lesson about wearing the holster correctly.

Wexton, however, saw the incident a different way.

“A lot of people in the General Assembly seem to think that more guns are the answer to everything, and then one of my fellow legislators carelessly leaves a gun sitting in the middle of a public place,” Wexton said. “It makes me concerned, and there seems to be a disconnect.”