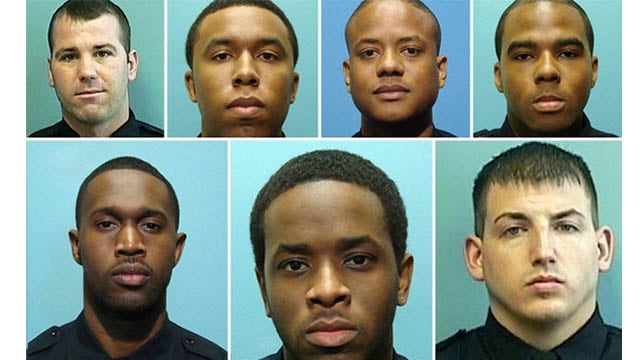 Seven Baltimore police officers in an elite gun unit were arrested Wednesday, all of them accused of wide ranging abuses of power including citizen shakedowns, falsified court documents and overtime fraud.

According to the indictment, the officers robbed residents of tens of thousands of dollars in multiple shakedown schemes over several months, and some of them nearly doubled their salaries by lying on their time sheets. The racketeering charges against the seven men come about a month after the city agreed to the terms of a sweeping consent decree aimed at reforming the practices of the Baltimore Police Department.

In addition to the racketeering charge, Gondo was named in a second indictment and faces charges in a drug dealing conspiracy. The investigation into the seven police officers began after a Drug Enforcement Administration investigation into Gondo’s dealings with the drug operation. A recording device in a BPD cruiser, as well as other electronic surveillance aided the investigation.

“What you see is a lack of respect for the system, particularly in these discussions about overtime when the sergeant is away on vacation and the officers are allegedly at casinos and various other places billing overtime,” said U.S. Attorney for the District of Maryland Rod J. Rosenstein. “There’s a reference in the indictment to an allegation that one of the defendants mentions that working for the police department is ‘easy money.’”

Jenkins earned a base salary of $85,406 per year. According to the indictment, by fudging his overtime numbers, he was able to nearly double that figure. In a phone call recorded by authorities, Rayam and Gondo “discussed how Jenkins, Hendrix, Taylor and Ward had been committing overtime fraud for, ‘a whole year’ making ‘at least $8,000 to $10,000 a month,’” according to the indictment. 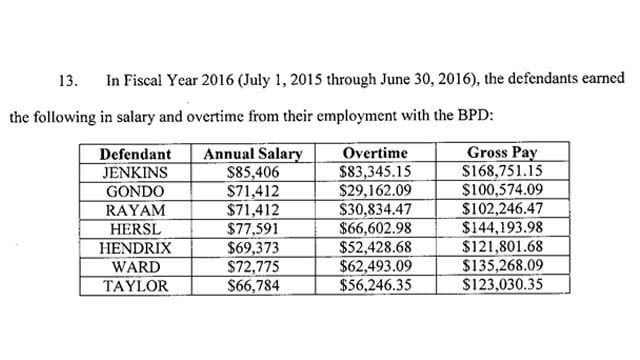 A screenshot of the indictment shows the salary breakdowns of seven Baltimore police officers accused of overtime fraud.

The men stole money and drugs from citizens during traffic stops, after detaining them, and after falsifying affidavits to obtain search warrants and entering their homes, according to the indictment. They would turn off body cameras when they needed to, prepare false reports to conceal what they’d stolen, and coach one another on one how to give false testimony.

In one instance outlined in the indictment, Rayam, Gondo and Hersl pulled a man and a woman over in July 2016. “Where’s the money,” asked Rayam. The man handed over $3,400, which the officer pocketed.

They brought the two people to a BPD office where Jenkins posed as a federal officer and asked the man if he had any cash at his house. When he said he did, the officers took them to their home and stole $20,000. Jenkins asked the man if he knew of anyone “big” the officers could rob. In exchange for such information, Jenkins told him he could “wind up with ‘ten kilos’ of drugs in his backyard” that the man could then sell.

All seven officers have been suspended without pay and are in federal custody. Six of the seven officers were ordered held in jail Thursday while they await trial. The seventh officer, Taylor, has a scheduled detention hearing on Friday.

“We wouldn’t be under a consent decree if we didn’t have issues,” said Davis. “We have issues.”

“These seven police officers acted disgracefully,” he said. “They betrayed the trust that we had and are trying to build upon with our community at a very sensitive time in our city’s history.”