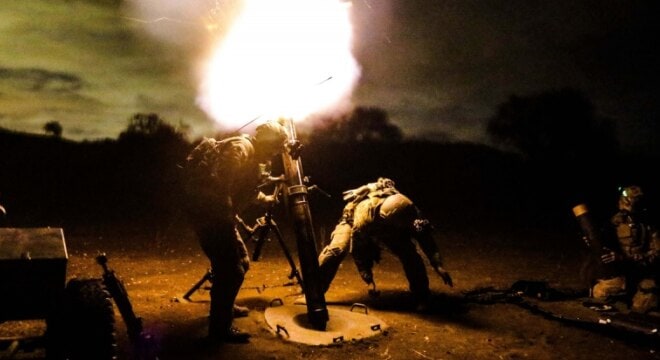 The adage that close only counts in horseshoes and 120mm mortar rounds may be coming to an end as the Army is planning a new round that puts an emphasis on precision.

The Army’s new 120mm High Explosive Guided Mortar, or HEGM program, ended its solisication period in January and aims to replace the current Accelerated Precision Mortar Initiative– capable of landing a shell within a 10 meter circular area of probablity– with one able to go less than 1 meter.

While APMI, developed during the opening stages of the conflict in Afghanistan, was revolutionary for the time, especally for troops in isolated areas without organic artillery support, the Army thinks the new round can do better.

The improvement comes from a Semi-Active Laser seeker in the head of the HEGM mortar round that enables it to home in on a specific target that is illuminated by a laser designator– enabling it to correct in-flight if the target is moved. The current APMI shell uses GPS guideance and, once its fired, can’t be adjusted.

The new “smart” round can be used in all 120mm mortars currently in service and both enables less collatoral damage on the reciving end, and allows troops to displace if needed to avoid enemy artilery from firing back at their location, all while conserving logistical resources.

The Army plans to conduct an open competiton in 2018 from among the developmental contract winners set to be announced late this year.

HEGM is still in the preliminary design stage but the program expects production to begin in fiscal year 2021 and produce about 14,000 shells.

Meanwhile, the Army is also developing the new M777ER, or Extended Range, 155-millimeter howitzer which is expected to double its current effective range of about 15 miles when using regular artillery shells to over 43 miles.

To maintain overmatch, the Army is developing the M777ER, or Extended Range, which should be able to shoot beyond 70 kilometers. Tests conducted late last year at the U.S. Army's Picatinny Arsenal research and development facility have led officials to believe they're on the right track. Armament Research, Development and Engineering Center (ARDEC)http://www.popularmechanics.com/military/weapons/a25495/us-army-double-range-howitzers/