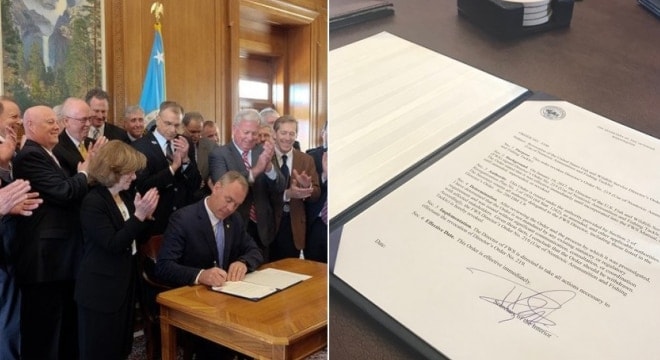 After riding to work on a horse, the new Secretary of Interior on his first day on the job signed orders overturning a pending ban on the use of lead ammunition and seeking to expand public land access for hunting and fishing.

Former Montana Congressman Ryan Zinke, now Interior Secretary, was confirmed by the Senate on Wednesday and showed up ready to work on Thursday atop a borrowed U.S. Park Police horse. After greeting staff, Zinke got down to business by signing a pair of directives, 3346 and 3347, halting a planned ban on lead ammunition and expanding access to public lands.

“Outdoor recreation is about both our heritage and our economy. Between hunting, fishing, motorized recreation, camping and more, the industry generates thousands of jobs and billions of dollars in economic activity,” said Zinke in a statement. “Over the past eight years however, hunting, and recreation enthusiasts have seen trails closed and dramatic decreases in access to public lands across the board. It worries me to think about hunting and fishing becoming activities for the land-owning elite. This package of secretarial orders will expand access for outdoor enthusiasts and also make sure the community’s voice is heard.”

The first order, 3346, scraps the controversial directive issued by the outgoing Obama-era U.S. Fish and Wildlife Service administrator to require the use of “nontoxic ammunition and fishing tackle to the fullest extent practicable” on lands and waters controlled by the agency by January 2022.

Zinke’s second action, 3347, directs bureaus and agencies under the Department of Interior such as the Bureau of Land Management, U.S. Fish and Wildlife Service, and the National Park Service, among others, to identify areas where outdoor activities can be expanded for recreation, hunting and fishing. This process would be assisted by a reformed Wildlife and Hunting Heritage Conservation Council, made up of members appointed by the Secretaries of Agriculture and Interior.

With a portrait of Teddy Roosevelt in front of the signing table, Thursday’s ceremony was joined by representatives from several pro-gun groups including the Congressional Sportsmen’s Foundation, National Shooting Sports Foundation, National Rifle Association, and Safari Club International.

“Secretary Zinke’s rapid response to the previous administration’s parting shot on hunters, target shooters and anglers demonstrates the true friend and common sense solutions we can expect from the Department of the Interior,” said Lawrence G. Keane, NSSF senior vice president and general counsel, in a statement.