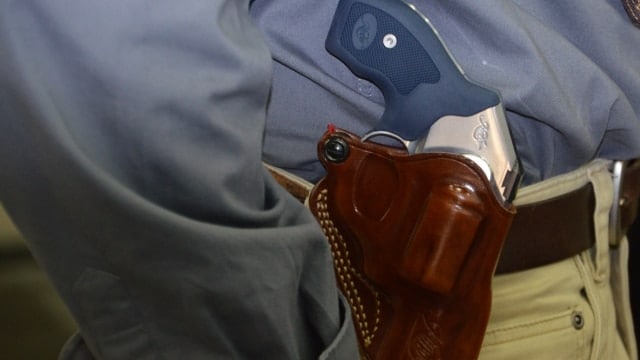 The Norman case involves that of a man who violated Florida law when his legally concealed gun was exposed by accident but takes aim at the state’s ban on open carry as a whole. (Photo: Chris Eger/Guns.com)

Florida’s high court on Thursday stood 4-2 behind the state law preventing the carry of firearms openly — citing it does not infringe on the Second Amendment.

The decision came as an appeal of a 2012 second-degree misdemeanor conviction of Dale Norman, 26, who was found guilty by a succession of lower courts for Open Carrying of a Weapon outside of his home.

The court held that state lawmakers had the ability to regulate the use and manner of the Second Amendment’s right to bear arms as interpreted by the U.S. Supreme Court in the Heller and McDonald decisions and that Florida’s ban on open carry was legally sound as it only regulates only one manner of bearing arms.

“Because this law does not amount to an entire ban on a class of guns or completely prohibit the bearing of firearms in public and does not affect the right to keep arms in one’s home, ‘where the need for defense of self, family, and property is most acute,’ we conclude that Florida’s Open Carry Law does not severely burden the right,” wrote Justice Barbara Pariente in the 47-page ruling handed down this week.

Justice Charles Canady, joined by Justice Ricky Polston, rejected the majority’s logic, arguing there is no substantial link between the open carry ban and public safety. In the dissent, he proffered that state lawmakers in 1987 only excluded open carry to achieve passage of concealed carry legislation, arguing case law since then has evolved to include the right.

“More to the point, the Legislature decided that the sacrifice of open carrying was a necessary and appropriate response to the public opposition generated by the passage of the concealed-carry law,” wrote Canady. “But the legal landscape has now dramatically shifted. Heller has settled that the Second Amendment protects the right of individuals to keep and bear arms.  And Heller’s historical analysis points strongly to the conclusion that the individual right includes the right to carry arms openly in public.”

Florida is just one of five states in the country that ban open carry and is in a club that includes California, New York, and Illinois.

Second-degree misdemeanors in Florida, which Norman was appealing, are punishable by up to 60 days in jail and a fine of up to $500.00.

Proposals are pending in the state legislature to legalize open carry with the support of gun rights organizations.