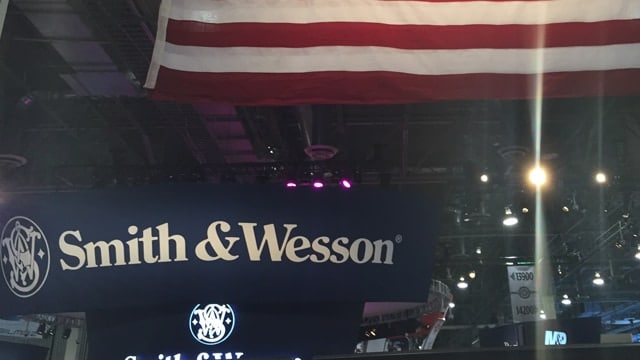 Price per share fell to $18.83, a penny less than the low point in a year, for American Outdoor Brands Corporation — formerly Smith & Wesson Holding Corp. The company adjusted its financial outlook by $36 million, dropping earnings for the fiscal year ending April 30 from $930 million to $894 million.

Company executives aimed to quell concerns about inventory levels during Friday’s conference call. Smith & Wesson along with other gun makers anticipated a surge in demand would follow federal elections. But three months before the quarter ended on Jan. 31, political fears that had been influential on the gun buying public were alleviated by the election of a pro-gun president.

“Consumer firearm purchasing at the beginning of the quarter was strong, but towards the end of the quarter began to cool leading us to lower our guidance for the balance of our fiscal year,” said James Debney, AOBC’s chief executive officer, in his opening remarks.

Firearms continued to make up the majority of sales — $197 million — for the growing outdoor goods conglomerate amid a nationwide decline in gun sales. That figure included $137.6 million in handguns, $50 million in long guns and $9.4 million in other related services, the filings show. Outdoor goods and accessories contributed the remaining $36.5 million.

Debney explained the company’s inventory levels are “not really up that much” and attributed the increase to the acquisition of a new company. According to the filings, the company is beyond its desired eight week threshold for demand. Yet, Debney said he’s more concerned with understanding the adjusting gun buying market.

Gun sales dropped 9.6 percent across the country during the company’s third quarter, according to a Guns.com analysis of data provided by the Federal Bureau of Investigation. That figure includes a 19 percent decrease in handgun sales and a 2.7 percent decrease in long gun sales.

While recent history has shown political influence having a significant impact on the gun buying public, when and how it forms is unpredictable, leading gun makers to rely on seasonal trends to dictate manufacturing efforts. But industry experts say seasonal sales trends have increased as more people of different demographics are buying guns. Yet, AOBC is still trying to understand the activity.

“As a predominantly handgun business in our firearm segment, that impacted us and we built that all into our guidance going forward,” Buchanan said. “That’s not to say we are weak in long guns, we just have a much smaller part of the business in the firearm segment.”

He added that the company is anxiously awaiting background check numbers for February, which, at time of publishing this article, have not been released.

Nine months into the fiscal year, AOBC reported a 34.3 percent increase in total sales with $674 million. When shareholders approved the company’s name change last year, they also approved the company’s new mission as an outdoors company rather than limiting it to a gun maker. It was then executives raised financial expectations to $930 million, an increase of $200 million.

Late last month, competitor Sturm, Ruger & Company ended its fiscal year with a 21 percent increase in earnings — $664.3 million in sales and a $87.5 million profit — despite a slowdown in its fourth quarter ending Dec. 31.