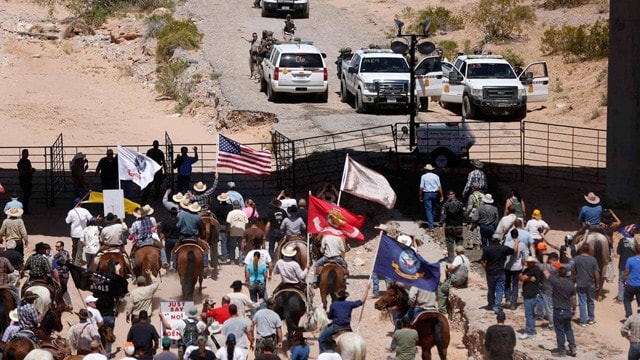 Supporters — many of which armed — of Nevada rancher Cliven Bundy confronting officers with the Bureau of Land Management in April 2014. (Photo: AP)

Testimony by federal officials in court Thursday revealed contradictions and confusion with the chain of command as the 2014 standoff with rancher Cliven Bundy and his supporters came to an end.

After nearly a week, the standoff came to a climactic end on April 12, 2014, after authorities stayed through the night despite being told by the federal agent in charge the day before to cease all operations and leave, The Arizona Republic reported.

About 1,000 people, many of whom were armed, came to the area in support of Bundy, who was involved in a decades-long battle over grazing rights with the Bureau of Land Management. Federal authorities had moved in to seize Bundy’s cattle as payment for the more than $1 million in grazing fees they say he owed.

Authorities already began rounding up Bundy’s cattle when, according to BLM director Neil Kornze, there became serious concerns over the safety of officials as well as the public, causing the federal government to make a decision to back down.

Dan Love, BLM special agent in charge of operations, announced to officials at the site on April 11, 2014, that they were to stop seizing Bundy’s cattle, pack up, and leave, and a news release was set to be sent out the following day announcing the decision. Despite this, according to court testimony, law enforcement officials were commanded by their own supervisors to move forward and engage with the protesters using non-lethal means.

“We were still under threat,” U.S. Parks Police Officer Tara McBride said in court last week, adding it was her understanding that they were to stop gathering the cattle but remain at the standoff “to provide security for the (incident command post)” because her supervisors anticipated a bloody battle with the protesters.

“We had intelligence from the FBI that individuals on a domestic terrorist watch list had arrived and were camped out at the Bundy compound,” said U.S. Park Police Officer Brandon Novotny. “We received intelligence there was going to be an attack.”

Nonetheless, McBride and her team expressed concern over engaging the protesters. More specifically, they feared the non-lethal pepper rounds would be mistaken for live rounds, causing armed protesters to return fire.

“I was scared that as leader of my team, I was not going to get my people out. I thought I was going to see one of my friends’ heads explode,” McBride said.

In fact, McBride said as her team positioned themselves as directed, they discussed the risks amongst themselves. Additionally, McBride said, her team twice requested permission from her supervisor to fall back, but both times the requests were denied.

Defense attorney Richard Tanasi said the multiple commands were not only confusing but contradictory and could have contributed to a violent escalation between federal officials and protesters. Tanasi also added the situation could have more quickly been defused had officials simply followed the original commands to cease operations.