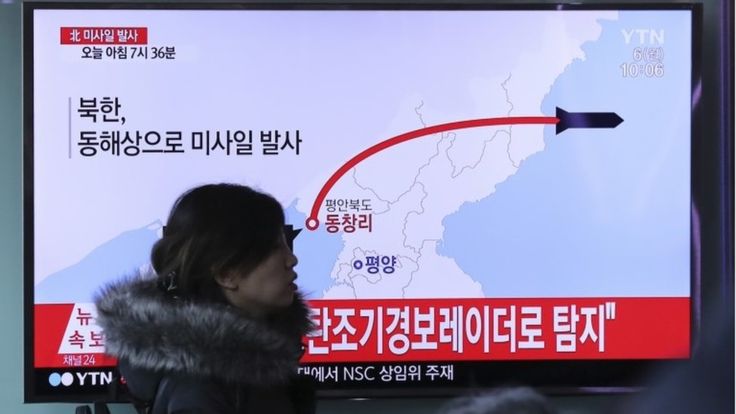 The path of the ballistic missiles shown on South Korean TV (Photo: AP)

North Korea launched four ballistic missiles toward the Sea of Japan on Monday, the BBC reports.

The South Korean military indicated the missiles were fired from the Tongchang-ri region, near the northern border with China along North Korea’s west coast. The missiles flew some 600 miles to the east, and three of them fell into Japan’s exclusive economic zone in the Sea of Japan.

The United Nations has banned North Korea from any missile or nuclear tests, and Japan’s Prime Minister Shinzo Abe called the most recent launch a “new stage of threat”.

The U.S. military said they tracked the launch but that it did not pose a threat to North America.

North Korea had threatened on Friday to launch missiles in response to the Foal Eagle military exercises being conducted by South Korea and the U.S., and Monday’s launches were just the latest in a series of missile tests carried out by the country.

Though experts say the country’s missile technology is likely improving, most think North Korea is still a long ways away from being able to fit a nuclear warhead onto a missile.

The launches come after a busy month for North Korea’s leader Kim Jong-Un, who authorities say ordered the assassination of his half brother, Kim Jong Nam, and the execution of five high-level officials with anti-aircraft guns.