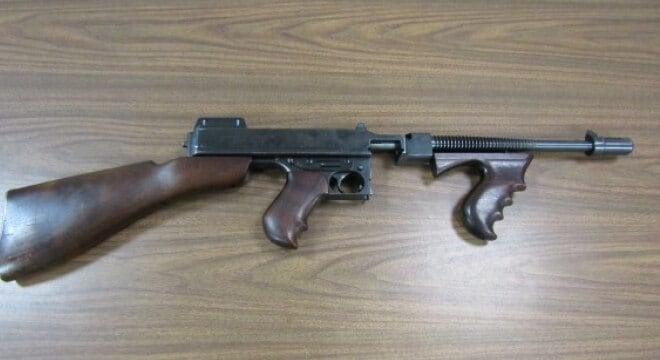 The Colt Navy overstamp Thompson has been used by the town’s police since the Prohibition era (Photos: Gunbroker)

Plymouth Borough, outside of Wilkes-Barre, Pennsylvania, isn’t big, but they have a vintage and transferrable Tommy gun that they want to get rid of if the price is right.

“I guess it was more or less a common weapon with bank robbers back in the Bonnie and Clyde era,” Gary Kochinski, borough council president, told local media about the piece, which has been on the town’s inventory since at least the 1930s. Concerned with the potential for armed robbery, local banks got together and bought the gun for the local police department. 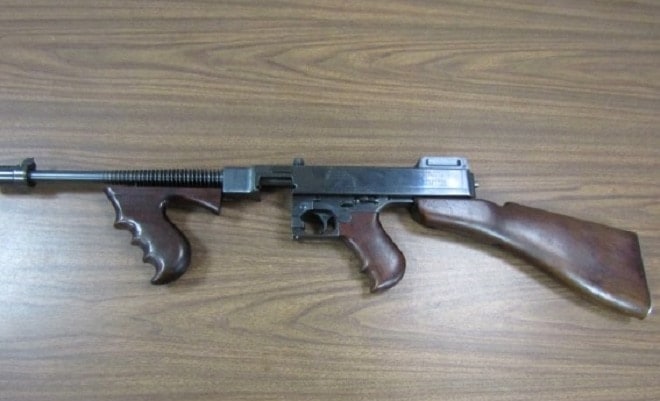 Often thought of by militaria collectors as the holy grail of U.S. sub guns, the overstamp came about when Auto Ordnance moved to offload their stock of Colt-made M1921 Thompsons and, modifying them slightly by reducing their cyclic rate of fire from 800 rounds per minute to a more pedestrian 600, over-stamped the “1” in 1921 with an “8.” Plymouth never had cause to use it, though they did loan it to neighboring Wilkes-Barre during a 1982 active shooter incident that left 13 dead. Other than that, the vintage “Chicago Typewriter” has been used mainly for training.

The Title II/Class 3 weapon is listed on Gunbroker, with a current price of $26,000 and five days to go before the bidding ends.

In recent years several agencies have liquidated their stocks of aging Tommy guns including St.Louis PD who put a cool $1 million worth of the .45 ACP SMGs up for sale in 2014 and another North Carolina department who moved to swap a pair of Thompsons for 88 newer semi-auto Bushmasters.

In 2015, the town of Kinston, North Carolina, who had picked up an overstamp to ward off possible tobacco payroll robbers in 1935, sold their gun for $36,750, which is about average for the model.