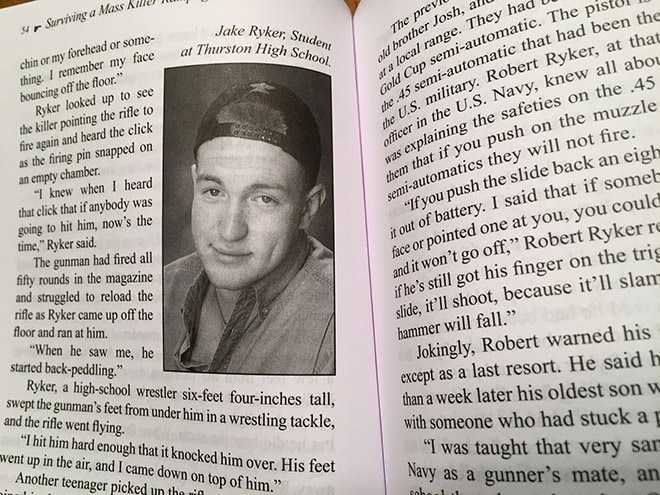 The interviews with real actors in these tragedies is what sets Chris Bird’s book apart. Each chapter is full of pictures of key players, settings and events. (Photo: Eve Flanigan)

Well-known gun author Chris Bird has produced a new book. The full title is Surviving a Mass Killer Rampage: When seconds count, police are still minutes away. Bird requested a review by Guns.com staff, and I was fortunate to be chosen as the reviewer.

In this meticulously researched publication, Bird delves into almost every mass murder spree that’s been in the news in recent history, with an emphasis on the actions leading up to, and finally actions taken to end the events.  He provides an overview of police and other institutions’ philosophies regarding mass killings, as well as analysis of the evolution of practice and policy.

From 1966 in an Austin, Texas tower to 2015 in San Bernardino, Bird provides the reader with gripping imagery of each attack. First-person interviews with key players and witnesses make the stories rich. Bird’s third-party look at actions taken by bystanders, police, and people in other official roles reveals important insights that have not previously been publicized, in many cases thanks to socio-political connections and agendas.  For example, the actions of Matthew LaPorte, the Air Force ROTC  student who attempted to tackle the Virginia Tech killer, is not even mentioned in a post-event, cross-disciplinary panel’s analysis of the incident. LaPorte was hit with eight rounds and though he expired at arm’s length from his killer, his unarmed counterattack saved lives by delaying the pace at which mass murder that was taking place. 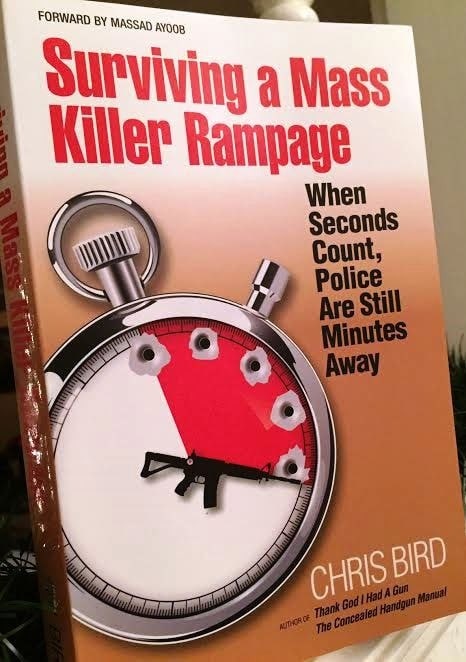 Surviving a Mass Shooting: When seconds count, police are still minutes away is available for $27.95. (Photo: Eve Flanigan)

Refreshingly, he avoids being overtly preachy. The facts are exposed in such a manner that the reader is afforded the dignity of drawing her own conclusions.

What’s not included in the text is any mention of the murderers’ names. Bird explains in the Introduction that this is on purpose, to deprive these depraved attention-seekers of the notoriety they desire, or desired before their own expiration. It’s done well.  The coverage of the killers’ pre-incident records, as recorded by authorities, is so detailed as to lend no sense of gaps in the information.

Bird has been a pistol shooter much of his life, and has availed himself of training in defensive pistol tactics. Through these connections as well as an intense interest in research, he provides an overview of models used to train civilians to respond to attacks on groups or facilities. He takes a long look at Ohio, where some school districts have sent willing teachers to state-sanctioned courses that included live fire. Ohio is the most progressive state in the Union in terms of formalizing the process for teachers to become armed, and following a model to develop skilled defenders out of the willing — however new to firearms they may have been at the start.

Two chapters are devoted to jihadist events. Bird takes a scholarly but unflinching look at the cost of political correctness while explaining the thought behind official response to some incidents.

This well-written book is valuable for me as an instructor, as it allows deeper insights regarding incidents, like the 1991 Luby’s Cafeteria massacre in Killeen, Texas, that I often use as a point of discussion.

The book would be interesting to any institutional administrator or legislator considering the pros and cons of establishing an armed safety plan for their jurisdictions, especially if there is strong opposition to their designs.

It would even be useful for the non-gun owner, to understand the mathematical odds of surviving an attack when working, attending church or school, or recreating in armed versus unarmed environments.

A British ex-pat living in Texas and a longtime pistol shooter, Bird has deep curiosity and an appreciation of the right to keep and bear arms for personal and public security. Perhaps, not having been born into the RKBA, he holds it a little dearer to his heart than even many members of the gun-owning public. Regardless of his motivation, he does tell stories in a way that keeps the reader’s attention and provides food for thought after the book is closed.

Surviving a Mass Killer Rampage: When seconds count, police are still minutes away is available from Bird’s own Privateer Publications for $22.95 plus $5 shipping and handling.