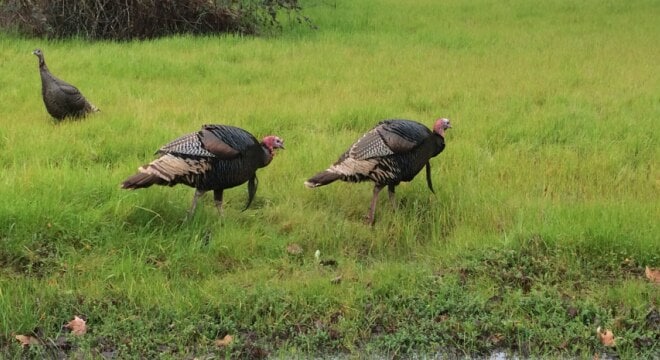 The upcoming 2017 spring wild turkey season will be the first hunting season with significant participation for which nonlead shot will be required statewide, notes CDFW (Photo: CDFW)

The California Department of Fish and Wildlife issued a reminder to sportsmen that this year’s spring wild turkey season will be the first in which traditional ammunition cannot be used.

In a release issued Monday, CDFW advises hunters taking part in the season, which begins March 25, that nonlead ammunition is now required statewide when hunting wild turkeys with a shotgun.

“These regulations apply both to public and private lands (except for licensed game bird clubs), including all national forests, Bureau of Land Management properties and CDFW lands,” notes the agency. “Private landowners or anyone authorized to hunt on private land must also comply with these regulations.”

Citing a need to protect the California condor range, in 2008 the state began modifying the methods for taking game animals to include selective bans on lead ammunition. Assembly Bill 711, passed in 2013, requires the complete ban on traditional ammunition for hunting in California by July 1, 2019. The bill took effect in 2015.

A study conducted for the National Shooting Sports Foundation in 2014 held that a total ban on lead ammo for taking game in California could result in the loss of more than 1,800 hunting-related jobs statewide due to an estimated 51,000 hunters no longer participating in their once-chosen sport.

While the newly installed Secretary of the Interior Ryan Zinke recently rolled back a brief federal mandate by the outgoing Obama-era U.S. Fish and Wildlife Service administrator to require the use of “nontoxic ammunition and fishing tackle to the fullest extent practicable” on lands and waters controlled by the agency by January 2022, individual states are looking at prohibitions of their own.

For example, in Illinois, SB 1985, banning use of lead ammunition on public lands, is set for a hearing with the Illinois Senate Environment & Conservation Committee on Thursday.