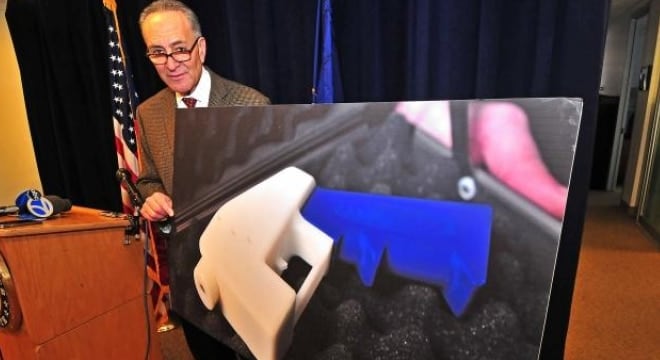 Senate Democrats on Monday introduced a bill that would mandate all 3D printed guns have at least one primary component made from metal.

The bill, S 533, would update the 25-year-old Undetectable Firearms Act, which requires all firearms to be detectable by a metal detector, by requiring at least one main component such as the frame or barrel be made of metal. Current regulations require a gun to contain at least 3.7 ounces of steel so they can be discovered by a metal detector, but the sponsors of the expansion argue the metal part, if unneeded, can be thrown out leaving a gun to be operable– and undetected– without it.

“Thanks to advances in technology, anyone with a 3-D printer can simply print a fully-functioning firearm that can be snuck through a metal detector without being noticed,” said U.S. Sen. Bill Nelson, D-Fla. “Congress acted in 2013 to ban these guns, but a loophole in the law allows people to attach a removable piece of metal to get around that law. These guns pose a real threat to our safety and we need to be doing everything we can to keep them off the streets and out of the hands of those who wish to do harm.”

Nelson’s proposal, backed by nine prominent Democrats including Charles Schumer, Ed Markey, and Dianne Feinstein, would expand the recently renewed Undetectable Firearms Act to mandate that the slide or cylinder or frame or receiver of a handgun be made of a steel. Shotguns and rifles would have to have a steel barrel.

Supporters cite an incident last August in which Transportation Security Administration screeners at the Reno airport discovered a loaded .22-caliber revolver at the security gate whose main components were apparently all 3D printed.

This is not the first time Nelson and Schumer have tried to expand the current law. When the UFA was renewed in 2013 for another decade, they unsuccessfully tried to amend its language to expand coverage of 3D firearms. In 2015, Democrats backed a standalone effort that never made it out of committee.

The measure has been referred to the Senate Committee on the Judiciary.