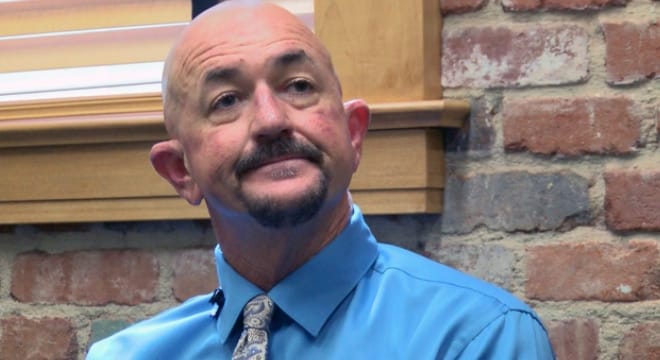 Kent Williams sued Bakersfield PD over his 2014 arrest, but a federal judge last week sided with police and dismissed his claim (Photo: bakersfieldnow.com)

A federal judge dismissed claims by a former vice principal and concealed carry permit holder that officers violated his rights when they arrested him for having a gun at school.

The plaintiff in the case, Kent Williams, argued two Bakersfield Police officers and the city were liable for Fourth Amendment unlawful seizure violations as well as false arrest and negligence as they had no probable cause to take him into custody. U.S. District Judge Jennifer L. Thurston disagreed, holding in an 11-page decision last week that the officers acted reasonably.

Thurston concluded school officials, when they found out that Williams had the gun on campus were “seriously distressed” and others would have been had they known.

“It is reasonable to assume that had others—particularly the parents of the students—been aware of the unsecured, loaded gun kept in a backpack on the floor of Plaintiff’s office, the entire school community would have been distressed by the knowledge and this would have interfered with the learning environment,” wrote Thurston.

In 2014, a Bakersfield police school resource officer at Tevis Junior High took Williams, a vice principal at the school for five years, into custody after it was reported the school employee had a firearm. Williams, who had a valid concealed carry permit issued by Kern County, had his handgun seized and was booked through the Kern County Jail though later released after six hours.

At the time the California Gun Free Zone Act, which makes possession of a gun within 1,000 feet of a school in the state illegal, had an exception for law enforcement and concealed carry holders. With no charges filed against Williams, he moved to file suit against the city and the officers while resigning from the school system after a nearly 30-year career.

Per court documents, the knowledge that Williams had a gun on campus surfaced after he showed the weapon to a fellow faculty member, telling him “I will get them before they get me” without specifying who “they” were.

Several days later, Williams shared with the same individual that he was beginning counseling and had been placed “on suicide watch” for “being messed up in the head”— pantomiming pointing a gun to his head with his fingers. This led the “unsettled” faculty member Williams had confided with to report what he knew to school officials, who in turn contacted police. When authorities intervened they not only took the vice principal into custody but went to his home and took possession of six other firearms for safe keeping.

Thurston held, though the officers technically were incorrect to arrest Williams since he was a permit holder, at the time they had reasonable belief that he violated California’s Gun-Free Zone Act by having the gun on campus without permission. The decision may be appealed to the 9th Circuit.