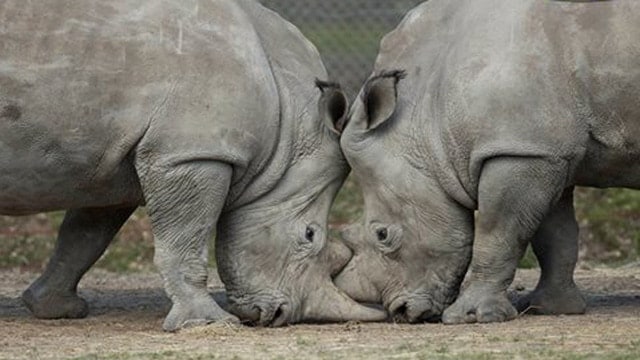 Vince, the white rhino who was killed this week, arrives at the zoo with Bruno in 2015. (Photo: Thoiry Zoo)

A four-year-old southern white rhinoceros named Vince was shot and killed by poachers who broke into a zoo near Paris sometime Monday night. After the animal’s death, poachers cut off his horn with a chainsaw.

Vince, who was shot three times in the head, was found by staff Tuesday morning, according to a statement from the Thoiry Zoo. The discovery left zoo workers both “extremely shocked” and saddened, while the zoo called the act “heinous.”

Furthermore, Vince’s second horn was partially cut off, indicating either the poachers were interrupted or their equipment failed before they were able to complete the job.

Despite numerous security measures, including zoo staff sleeping at the facility, it appears the poachers broke into the zoo through at least two separate fences, then forced their way into an animal enclosure in order to get to the rhinos.

Vince, who came to live in the zoo in March 2015, was one of three rhinos in the facility. The other two rhinos – five-year-old Bruno and 37-year-old Gracie – were not injured and are said to be healthy and safe. It’s unclear whether the poachers planned to steal their horns as well.

Rhinoceros horns, which are sought for their mythical healing properties and inaccurately believed to be an aphrodisiac, can bring in more than $35,000 per horn on the black market. More recently, the horns have been coveted as a social symbol.

While northern white rhinos are critically endangered – there are only three known to be alive in the world – the southern white rhino is not considered endangered with the current population standing at around 20,000. However, experts say rhino poaching has increased exponentially in recent years and endangered animal poaching represents a significant portion of the black market trade, ranking fourth, only behind drugs, counterfeiting, and human beings.

The incident is believed to be the first time in Europe poachers killed the animals while living in captivity. However, at some facilities, such as South Africa’s Kruger National Park, poachers are all too commonly seen. In fact, two poachers were shot and killed at the park in January 2016 during an exchange of gunfire with park rangers. Likewise, the world’s last male northern white rhino, Sudan, lives at the Ol Pejeta Conservancy in Laikipia, Kenya, and is protected 24-hours a day by armed guards. In a desperate attempt to keep him alive, caregiver’s cut off Sudan’s horn, rendering – they hope – him useless to poachers.

Authorities have not said what type of gun was used to kill Vince, but the incident remains under investigation.