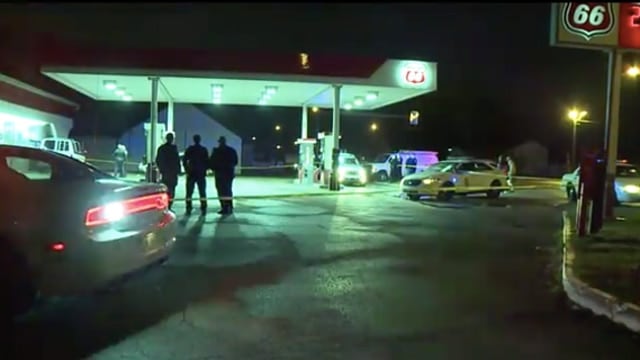 Customer say the gas station has been the target of several other robberies in the past. (Photo: Fox 59)

An attempted robbery at a Phillips 66 gas station in Indianapolis Monday night ended with gunfire and the suspect dead.

According to a press release from the Indianapolis Metropolitan Police Department, they received a call around 11:40 p.m. from the store owner who said he just shot a man who was trying to rob him. When police arrived on the scene, they found the suspect lying in the parking lot. He was pronounced dead at the scene.

Brian Nordby, a customer who was in the store at the time of the shooting, said the suspect walked in with a gun and demanded money before “things went bad.” Nordby said the store owner shot the suspect, who was later identified as 20-year-old Levi Walker, at point blank range.

With a gun still in his hand, Walker then stumbled outside and collapsed in the parking lot. Police found Walker’s gun lying next to him. The coroner determined Walker’s death was the result of two gunshot wounds to the torso.

The store owner, who has not been publicly identified, told investigators he feared for his life before he fired. Nordby added that he witnessed the incident and said from his own eyes he believed the shooting was a case of self-defense.

“They think it’s an easy target, but he’s not an easy target,” added Mark Simpson, who is also a customer. “He’s gonna take it into his own hands if his life is threatened,” he said of the owner.

Both Simpson and Nordby agree that the owner’s actions were justified, while Nordby said he hopes the shooting will serve as a lesson to others who may consider robbing the store.

The incident remains under investigation and while, at this point, the shooting is considered a justifiable homicide, the decision of whether or not to press charges against the store owner will fall on the Marion County Prosecutor’s Office. Police say there were several surveillance cameras in and around the business which likely captured the incident as it unfolded.