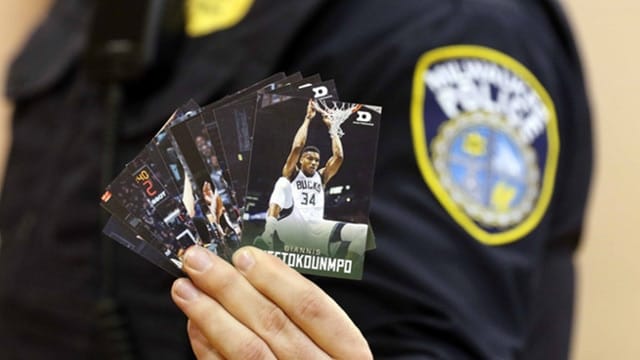 Thanks to generous donations from the Milwaukee Bucks and Daktronics, a company which makes trading cards and scoreboards, Milwaukee police officers will have the chance to hand out sports cards to kids in their communities.

While it was once commonplace for officers to carry – and hand out – trading cards, the practice fizzled out after companies stopped donating the cards. Police Chief Edward Flynn, who called sports cards a “wonderful opportunity” for officers to interact with kids, said when he joined the force about a decade ago, trading cards were no longer being handed out.

However, Flynn said he has been hoping for some time to bring back the practice. In fact, at prior meetings aimed at improving community relations, residents have repeatedly brought up the trading cards of days past.

In addition to 10,000 packages of sports cards, which will include a card for all 15 team players, Daktronics is also providing new scoreboards for half a dozen area schools and youth centers.