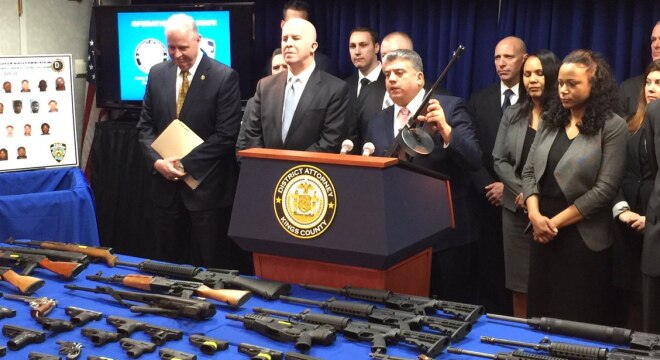 New York police and the Brooklyn District Attorney’s office on Wednesday announced 24 individuals have been arrested as part of a gun trafficking ring moving guns from Virginia to the city.

Acting Brooklyn District Attorney Eric Gonzalez, together with New York City Police Commissioner James P. O’Neill, showed off a selection of the guns seized tied to the case. All told, a 627-count indictment against 24 persons — 22 of whom were Virginia residents — has been filed in connection with a ring that allegedly moved guns from that state to New York over a nine month period.

“In this unique case, we charged more defendants and recovered more firearms than in any other case in Brooklyn’s history,” said Gonzalez in remarks.

The DA’s office identified the leaders of the conspiracy as Damian King, aka Havoc; Jacquan Spencer, aka Madcat; and Levar Shelborne, aka Wavy Boy. As noted by Gonzalez, many of those charged are members of the Bloods street gang family based in Virginia and Brooklyn. The indictment includes multiple counts of criminal sale of a firearm, criminal possession of a weapon, and conspiracy.

Officials contend between June 2016 and last month, the defendants operated in two different arms, with first gathering firearms with the help of straw buyers in the Henrico and Richmond County area of Virginia, while the second did the same in the Hampton and Newport News area. The ring ultimately used runners to bring up to a dozen guns at a time by car and bus to Brooklyn. Once in the city, they met with an undercover buyer who paid between $800-$1200 for a handgun and as much as $2,200 for guns considered “assault weapons” under New York law.

The proceeds from the sales went to buy drugs, jewelry, and sneakers, as well as to associates in jail.

“The illegal firearms sold during this investigation amount to a sizable arsenal,” said O’Neill.

Most of the defendants that have been taken into custody in the case were arrested in Virginia last week with the help of federal agents and members of the Henrico and Richmond Police Departments. They will be extradited to Brooklyn for trial.