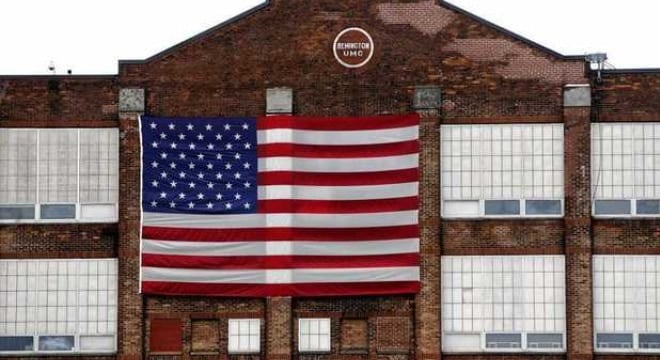 A flag hangs at Remington Arms Co. in Ilion. The gun maker reportedly is laying off 122 people at the factory. (Photo: Mike Groll/AP)

Staffing at the factory located in Herkimer County prior to the layoff of 122 hovered around 1,100, as noted by local media.

“The small arms industry is facing significant near-term challenges related to slowing order velocity and high channel inventories; a dynamic from which Remington is not immune,” said Jessica Kallam, Remington’s manager of media relations and public affairs, in a statement.

With the election last November of a new Republican administration to the White House, a period of record gun sales under the era of President Obama seems to be slowing. Federal gun checks declined almost 24 percent for the first month of 2017 compared to January 2016, a significant decrease year over year.

“After exploring all the options available to us, we are compelled to reduce our work force by releasing 122 team members today at our Ilion, N.Y. site,” said Kallam. “As we move forward, we will continue to monitor all segments of the business for growth opportunities.”

Staffing at the company’s New York plant has fluctuated over the past several years, cutting over 200 workers in two different rounds of layoffs in 2014– citing market conditions and the impact of the New York SAFE Act of gun control measures– then reportedly bringing back the same number of jobs in 2015.

In the meantime, Remington has sought to expand their operations elsewhere including the establishment of a new 2,000-employee factory complex in gun-friendly Alabama.

State Assemblyman Marc Butler, R-Herkimer, who is among a number of lawmakers backing a SAFE Act repeal effort, criticized the fact that the law made sales of the Bushmaster AR-15, a Remington product, illegal in the state.

“Isn’t that a wonderful message to send to a company that just celebrated its 200th anniversary here in New York?” Butler said.