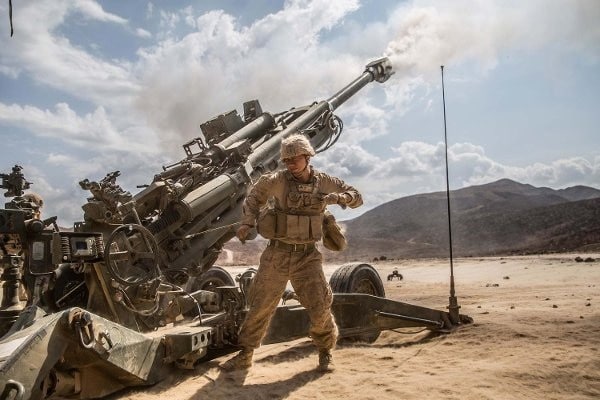 A California lawmaker on Thursday blasted President Donald Trump over the deployment of hundreds of artillery Marines and others to Syria, calling him a “war monger.”

“Putting our nation’s men and women in harm’s way to help assault a city in a faraway place is mission creep,” said Rep. Ted Lieu in a statement.

The Washington Post broke the story Wednesday, reporting that Marines and sailors with the 11th Marine Expeditionary Unit floated out of San Diego in October to support the Syrian rebels seeking to take control of the northern city of Raqqah, where the Islamic State has established a capitol.

Though the MEU is composed of 2,400 service personnel from various elements of the Navy and Marine Corps, including aircraft, infantry and other ground units, only the artillery Marines have been deployed with their M-777 Howitzers.

This is a typical first step in softening the battlefield to make way for a more personal ground assault to be carried out by the infantry and air elements onboard the three Navy ships, likely floating off the coast.

“It is (sic) also violates the current Authorization for Use of Military Force,” said Lieu. “When Congress passed the post-9/11 AUMF to fight Al Qaeda terrorists, it never had the intention of authorizing ground forces to help take over a city in the middle of Syria’s civil war in 2017.”

And while Marine artillery is pummeling Raqqah, a team of Army rangers will be operating in the area to support the initiative.

“The exact numbers and locations of these forces are sensitive in order to protect our forces, but there will be approximately an additional 400 enabling forces deployed for a temporary period to enable our Syrian partnered forces to defeat ISIS in Raqqah,” Air Force Lt. Col. John Dorrian told Military Times in a statement Wednesday.

A video on the Funker530 website shows American special ops troops staged on a road, purportedly near Manbij, two hours northwest of Raqqah.

Though the Trump administration is receiving flak because of its move in Syria, it was the Obama administration that paved the way with its military intervention in Libya in 2011 and Syria in 2014, leading some foreign policy analysts to suggest Congress reclaim its role as the arbiter of war.

The lines of battle in the Global War on Terror have muddied, allowing the executive branch to unilaterally decide where it can send its ground troops. That, coupled with the president’s reluctance to telegraph potential military action cripples the public scrutiny portion of foreign policy, leaving any checks and balances in the hands of the president, his cabinet and the military operating under the commander in chief.

Granted, the U.S.-led coalition has had a hand in the Syrian civil war shortly after it sparked in 2011, but it’s unknown if the recent insertion of ground troops could mark an escalation not seen since the U.S. invasion of Iraq in 2003 under President George W. Bush. In 2007, Bush ordered more than 20,000 troops into the country to maintain its security.

Experts maintain the invasion and subsequent invasion of Iraq led to the rise in popularity of ISIS, which was a fledgling group founded in 1999 and didn’t really see a rise to significance until about four years later.

Trump has promised to increase the size of the military and has requested a sizable budget boost to boot, even drawing ire from Republican Sen. Lindsey Graham.

To speed up mission accomplishment against ISIS in Syria, Defense Secretary James Mattis could look to send more ground troops to the region, as he suggested during his Senate confirmation hearing in January.