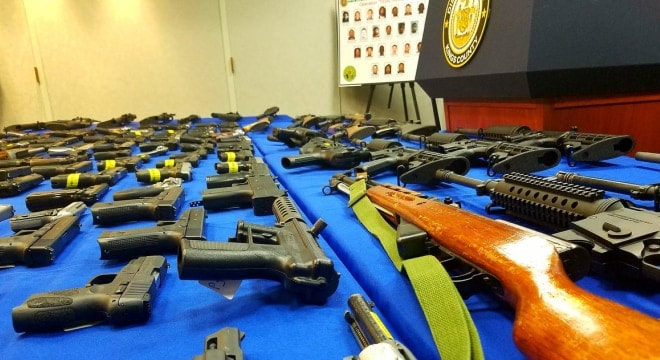 News of a New York gun trafficking ring in which 22 of 24 members hailed from Virginia is sparking calls for action in the Commonwealth. (Photo Brooklyn District Attorney’s office)

Officials in Richmond are reacting to news this week of a gun trafficking ring that operated in the state for the purpose of moving guns to New York with calls for firearm rationing.

On Wednesday, law enforcement and the Brooklyn District Attorney’s office announced 22 Virginia residents have been charged after allegedly moving 217 guns from Northern Virginia to the city.

In court-ordered electronic surveillance of the defendants, many are believed to be members of the Bloods street gang, some boasted of being able to buy several guns per day in Virginia through straw buyers and other contacts. This has the state’s top cop seeing red.

“This is ridiculous. Virginia’s gun laws are so lax we now have gun runners on police tapes bragging about how many guns they can buy,” said state Attorney General Mark Herring, a Democrat, on social media. “It’s way past time for universal background checks and a reinstatement of Virginia’s ‘one handgun per month’ law.”

As reported by the Richmond Times-Dispatch, the ringleaders of the conspiracy taken down by a combination of New York and Virginia police and federal agents organized gun buys in the Richmond and Hampton Roads areas. Each had extensive criminal records including felony convictions that involved gun use and one — Levar Shelborne, aka Wavy Boy — was arrested last September as part of a straw purchase of an AR-15 from a local shop.

“I think it’s an embarrassment to the Commonwealth when you have a story in another jurisdiction stating that a majority of these firearms are originating here in the Commonwealth. I’m offended by that,” said Richmond Police Chief Alfred Durham.

The Chief said his agency has recovered about 800 illegally possessed firearms in the past year. Before his appointment by Richmond Mayor Dwight Jones in 2015, Durham was assistant chief of the Washington, D.C Metro Police Department, a jurisdiction with some of the strictest gun laws in the country.

Since then, Durham has partnered with Metro Richmond Crime Stoppers to institute a “Gun250” campaign that offers an anonymous $250 cash bounty for information from the public that leads to recovery of an illegal firearm.

However, licensed gun dealers contend that regulations and mandates are already in effect designed to keep firearms out of the hands of bad actors, and adding a new layer will only target law abiding gun owners.

“There are enough state laws and federal laws that are in place,” said Tom Jenkins with NOVA Firearms in McLean. “If someone has criminal intent they will buy the gun or get the gun whichever way they want to and then dispose of it illegally.”