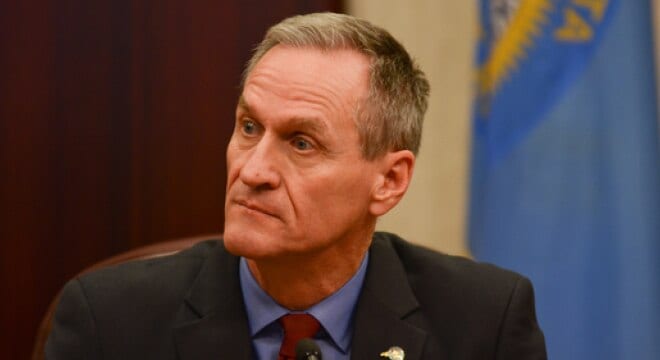 Gov. Dennis Daugaard says the measure sent to him this week is dangerous and he has promised a veto (Photo: South Dakota Public Broadcasting)

State lawmakers have forwarded a permitless carry measure endorsed by South Dakota Secretary of State Shantel Krebs to Gov. Dennis Daugaard, who has promised a veto.

Daugaard, a Republican, vetoed a similar bill in 2012 and is promising to do the same if given the opportunity.

“House Bill 1072 would eliminate the permit requirement in order to carry a concealed weapon,” said Daugaard on the measure last month. “Under this bill, the vetting process would be removed. Individuals with a proven history of violence or substance abuse and those who have been identified as a danger to the public or to themselves could not be restricted from carrying a firearm.”

DiSanto delivered 2,000 letters from South Dakota gun owners to Daugaard’s office this week urging his signature on her sponsored bill.