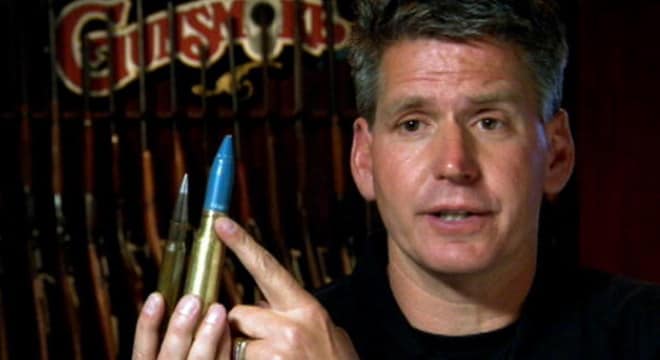 Richard Wyatt starred in the show American Guns alongside his wife and daughter. (Photo: Discovery Channel)

Richard Wyatt, 53, was found guilty Friday on two counts of conspiracy and eight tax charges at the conclusion of an 11-day trial. The deadlocked jury was unable to agree upon a verdict on three charges of dealing guns without a license.

The former star of the Discovery Channel show, which aired for 26 episodes in 2011 and 2012, Wyatt fell into a spate of legal troubles after the show was canceled.

Arrested first in 2015 for theft, authorities began investigating him for operating without a federal firearms license and failing to file taxes. This resulted in a subsequent arrest last February on 13 counts of dealing guns without a license, conspiracy, and tax-related charges after officials uncovered he sold guns at his store illegally and failed to report $1.1 million of income.

Per court documents and statements, Wyatt surrendered his federal firearms license in 2012 due to violations and, changing his store’s name on paper, continued to operate without a license, telling employees to list gun sales as “miscellaneous” in the store’s system rather than as firearms.

The store continued to display firearms and Wyatt provided gunsmithing and custom work on guns, operating with a straw license by changing the address of an existing FFL he had no ownership of to his business address. Firearms transfers were done through another FFL who performed the mandated background checks.

After wearing a body camera during gun buys at the unlicensed shop, undercover agents obtained an indictment and seized 583 guns from Wyatt’s Gunsmoke store in 2015.

“The laws and regulations surrounding the sale of firearms exist for a reason, and no one is above the law,” said Bureau of Alcohol, Tobacco, Firearms and Explosives Denver Field Division Special Agent in Charge Debora Livingston in a statement. “ATF is committed to ensuring every gun dealer is appropriately licensed, educated and inspected, and we will investigate those who believe the rules do not apply to them.”

Beyond the firearms charges, Wyatt failed to pay either personal or corporate income taxes for a three-year period and filed a false return in 2012 saying he lost money when in fact cleared $350,000.

Sentencing will be in front of Chief Judge Marcia S. Krieger on July 19.