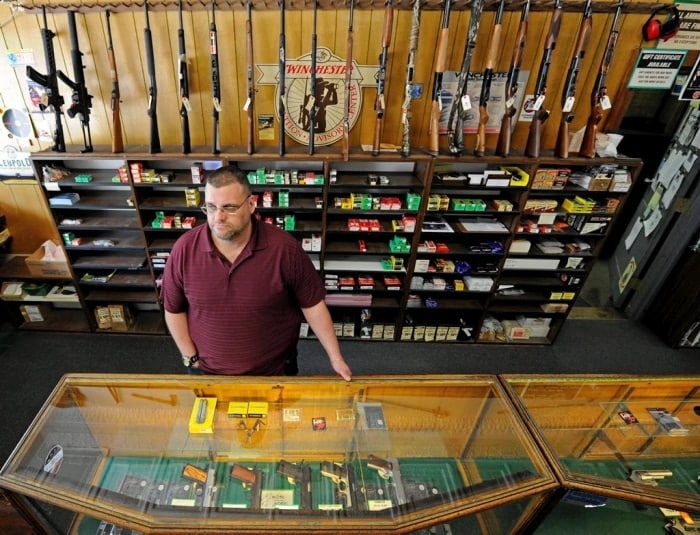 Keith Savage stands at the counter of his gun shop, Braverman Arms, in Wilkinsburg. Savage says he doesn’t think the Pennsylvania Instant Check System works and goes down too frequently. (Photo: Connor Mulvaney/PublicSource)

Co-sponsorship memos for Senate Bill 224 and House Bill 763 both cite the Pennsylvania Instant Check System’s $6 million annual budget — 95 percent of which covers personnel costs — as the main reason to ditch the 19-year-old system.

“I believe this money, as well as the fees used to sustain PICS, can be put to better use than supporting a duplicative firearm background check system of limited value,” said Sen. Camera Bartolotta, R-Washington, of her SB 224. “Eliminating PICS will also streamline the administrative burdens faced by Federally Licensed Firearms dealers surrounding the sale and purchase of firearms, while at the same time, maintaining public safety.”

“NICS has added the capacity to check for state prohibitors, i.e., those prohibitions based solely on state law,” he said. “This was something previously lacking in the NICS system.”

PICS was implemented in 1998 as a replacement for the state’s mandatory five-day waiting period, costing the Pennsylvania State Police Firearms Division $120 million to maintain over the last two decades.

State police estimate 60 percent of the checks processed through PICS are completed within minutes, but some can take more than two weeks. Meanwhile, NICS operates on the three-day default-to-proceed rule.

Bartolotta said her proposal would not only save millions, but also ensure “continued public safety with respect to gun purchases through the national system which most states now utilize.”

Both bills await consideration by the House and Senate Judiciary Committees.