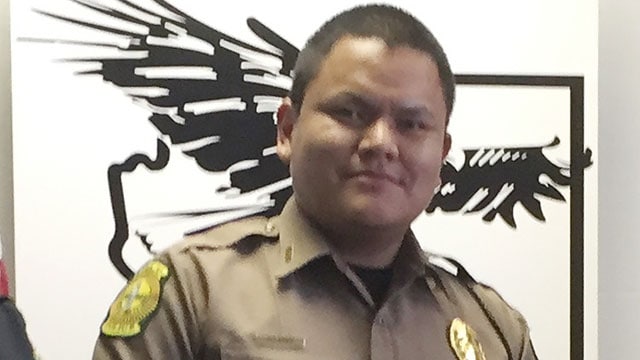 An officer with the Navajo Nation Police Department died Sunday afternoon after he was shot the night before by a suspect while responding to a domestic call near Prewitt, New Mexico.

According to a press release by the Navajo Nation, Officer Houston James Largo, 27, passed away around 3 p.m. Sunday at an Albuquerque hospital. He was a decorated officer who had been with the department for four and a half years.

Largo was shot late Saturday night on a county road near Casamero Lake. While details surrounding the shooting are still a bit scarce, it appears Largo was responding to a call for help from a woman. That woman, according to a report from the Navajo Times, then called for additional help on Largo’s police radio after he was shot.

When additional law enforcement officers arrived on the scene, Largo was found lying on the road with his service weapon on the ground near his feet. Two shots, one of which was stopped by Largo’s bulletproof vest, had been fired from the gun.

Responding officers also found the woman who called for help handcuffed to the steering wheel of a pickup truck parked at the scene. The keys to the truck were found inside the truck’s bed.

The woman, who has not been publicly identified, gave authorities information about the suspect, including his home address, in an attempt to help them locate him. The suspect, who was later identified as Kirby Cleveland, was not found at the residence, but additional information led authorities to a cave located close to the home.

Cleveland was found hiding near the cave and, with the assistance of the McKinley County Sheriff’s Office, was apprehended Sunday morning. Cleveland is now in federal custody.

In addition to the Navajo Nation Police Department and the McKinley County Sheriff’s Office, the shooting is being investigated by the New Mexico State Police and the Federal Bureau of Investigation.

In a statement released Sunday, the Navajo Nation Council expressed condolences and asked for respect for Largo’s family during this difficult time.

“We are very grateful for his service and we hope and pray that his family and fellow officers are comforted knowing that their loved one is now with the Creator and no longer in harms way,” said Speaker LoRenzo Bates. “The Navajo Nation was truly blessed to have Officer Largo serve and protect our communities.”

Kelsey Begaye, President of the Navajo Nation, said Largo’s death is a reminder of the dangerous situations officers often face.

“Our officer’s lives are precious,” Begaye added. “They are the ones who stand guard over our nation and protect us.”

Largo is the seventh officer to be killed by gunfire so far this year.