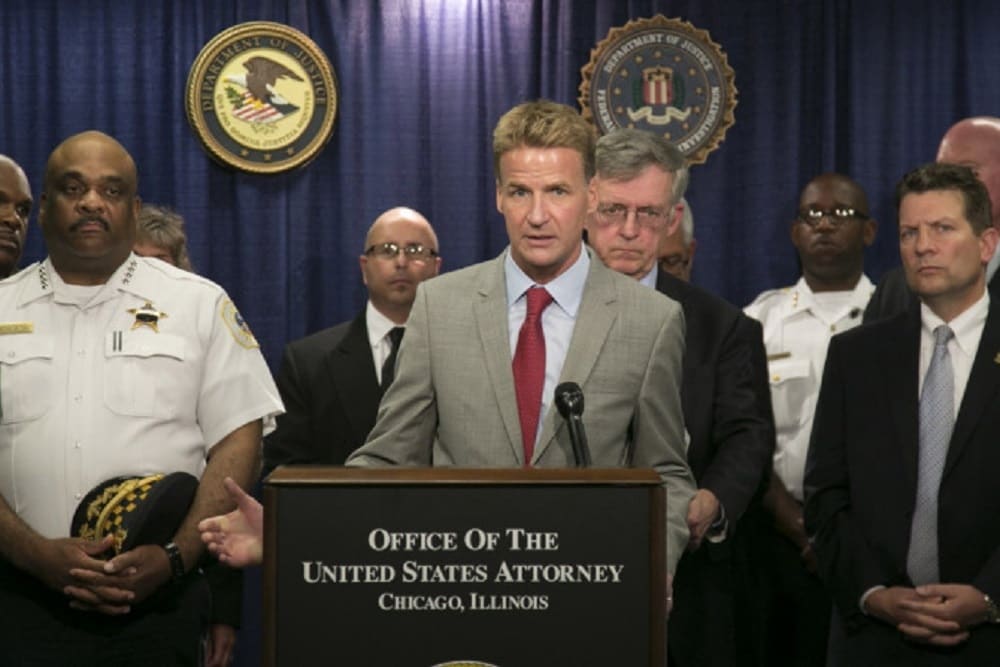 Former U.S. Attorney for the Northern District of Illinois Zach Fardon left an open letter behind after tendering his resignation Monday, highlighting key violent crime issues in Chicago and offering honest suggestions on how to fix them.

Fardon describes a city “on fire” after the release of a video showing then 17-year-old Laquan MacDonald being shot to death by a Chicago Police officer. That shooting then led to the firing of CPD Superintendent Garry McCarthy, a DOJ investigation into the police department, and a police force hesitant to make as many stops on city streets.

“So cops stopped making stops,” Fardon wrote. “And kids started shooting more — because they could, and because the rule of law, law enforcement, had been delegitimized. And that created an atmosphere of chaos.”

According to Fardon, there are both long term and short term reasons for the city’s gun violence problem.

Long term, the city has seen gangs entrenched in poverty stricken neighborhoods for decades, which are not going to magically disappear anytime soon.

Short term, the 2016 spike in violence can be seen as directly related to the destabilization of the police force and civil unrest caused by the series of unfortunate events mentioned above.

“Those things exploded a powder keg that didn’t change fundamentally the landscape of gun violence or law enforcement,” Fardon explains, “but they poured gasoline on the tragic aspects of those realities and further polarized our officers and our community.”

Fardon then offered his top five suggestions for dealing with these complex issues:

First, the Department of Justice must finalize a consent decree on how to reform and better fund and equip Chicago’s police department. Without an excellent and reformed police force, Fardon posits, the violent crime will never be stopped.

Second, hire more attorneys for the understaffed Chicago office and combine officers in Chicago’s federal crime fighting agencies — namely the FBI, ATF, and DEA — into one violent crime task force, a cohesive unit with “one mission and one leadership chain.” That unit should then “flood” the streets of Chicago’s most violent neighborhoods.

The National Guard is not the answer, Fardon writes, because “if you care about the long view – if you don’t want to be talking about “Chiraq” and “two Chicagos” ten and twenty years from now, then it’s an ill-conceived notion.”

“This is not war,” Fardon continues. “Wars are fought between enemies. There is only one enemy here, and it is us, all of us in Chicago. Every single one of us. We are the problem, and we are the solution. If we resort to wrongheaded measures, we might set ourselves back years, even decades in the long term fight.

Third, focus and monitor social media, which Fardon argues spreads gun violence like a virus. In this, he agrees with a study conducted by sociologist Andrew Papachristos that found gun violence spread along a predictable path, often through social media, much like pathogens of diseases such as HIV and hepatitis C.

Fourth, create non-political centers for kids in the inner city to offer them a way out of violent gangs, which often recruit kids as young as 10 years old. If caring people intervene, Fardon argues, most kids will “do the right thing if we help them find and figure out what that right thing looks like.”

Fifth, the Cook County bail bond system must be fixed. Violent gang members are often able to get out on bail, while poor non-violent offenders have to stay in jail awaiting trial.

Fardon concludes his letter with a message to his former colleagues: “You are everything that is right and good about public service. You are our hope. Carry on.”