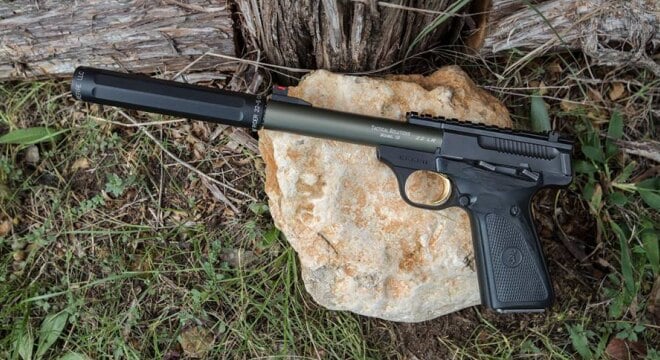 Gillibrand: “I will do everything I can to stop this ill-thought-out legislation that would allow more criminals to get their hands on these dangerous weapons.” (Photo: SureFire)

New York Democrat U.S. Sen. Kirsten Gillibrand is vowing to derail measures that would remove suppressors from the requirements of the National Firearms Act.

Allied with prominent gun control advocates and New York Mayor Bill DeBlasio, Gillibrand contends that a move to lighten the Great Depression-era regulations on suppressors would make it easier for criminals to get their hands on such devices.

“Law enforcement already has a hard enough job putting their lives on the line every day to stop gun violence in our communities,” said Gillibrand in a statement. “We can’t make it more dangerous and more difficult by making it easier for criminals to obtain deadly gun silencers. These deadly gun silencers pose a huge risk to our enforcement and our communities and I will do everything I can to stop this ill-thought-out legislation that would allow more criminals to get their hands on these dangerous weapons.”

The Duncan-Carter Hearing Protection Act was introduced by GOP sponsors U.S. Rep. Jeff Duncan of South Carolina and Rep. John Carter of Texas in January and aims to deregulate suppressors as a safety measure to help promote their use in protecting hearing. Enrolled as H.R. 367, the bill has 121 co-sponsors but no date for committee hearings. A companion Senate measure, S.59, has 11 co-sponsors.

Since 1934, the federal government has treated devices designed to muffle or suppress the report of firearms as Title II devices that required registration under the National Firearms Registration and Transfer Record and mandated transfers that included a $200 tax stamp. The HPA would repeal this requirement and treat suppressors as firearms – which would allow them to be transferred through regular federal firearms license holders to anyone not prohibited from possessing them after the buyer passes an FBI instant background check.

It should be noted that eight states, including Gillibrand and DeBlasio’s home state of New York, already ban civilian ownership of suppressors, which would not change under the Hearing Protection Act.

In the statement issued by her office, advocates from Americans for Responsible Solutions, Everytown and Moms Demand Action slammed the legislation, contending suppressors mask the location of a potential gunman and defeat the effectiveness of Shot Spotter technology used by law enforcement.

Guns.com has previously found Shot Spotter non-committal on the effect of suppressed firearms on their product. However, Shot Spotter refers to the debate on the company’s website, listing an article contending suppressors should not interfere with the detection system as long as the sound profile is entered in the scanner database.

Gillibrand’s pledge comes just a week after U.S. Sen. Chris Murphy, a Connecticut Democrat, argued that potential suppressor deregulation would be a danger to public safety.

“It will be a boon to the industry, but it will be terrible for the country,” said Murphy. “Silencers are used to commit crimes. They are used to conceal the fact that you are firing a weapon. There will be more crimes committed– more people killed– if silencers are legalized.”