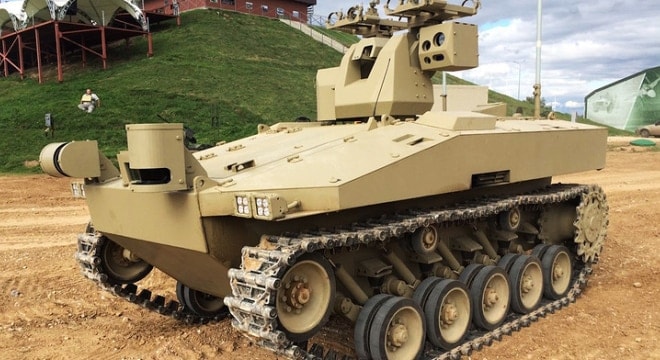 Kalashnikov’s BAS-01G Soratnik unmanned vehicle can carry a machine gun and quartet of antitank missiles, but the company’s CEO wants to supersize it. (Photo: Kalashnikov Concern)

In an interview with state-run media outlet Tass (Russian) (Google Translate), Krivoruchko hyped the partially-state run factories progress on advanced weapons including the new RPK-16 light machine gun before moving on to the mechanical elephant in the room– unmanned ground combat vehicles. The CEO advised a new 20-ton platform (described as a “робота” — robot) is under development which, when compared to what Kalash already markets, is huge.

The company showed off their current 7-ton BAS-01G Soratnik (Comrade-in-arms) unmanned vehicle in 2016, then last December made it do tricks for the Russian Ministry of Defence while armed with four anti-tank rockets and a machine gun. Alternatively, it can be modified to carry up to a 30mm gun or eight Kornet-EM laser-guided anti-tank missiles. Soratnik can be positioned as a bastion and act autonomously for 10 days as such in a standby mode, waiting to engage a threat.

The vehicle was shown off at the IDEX-2017 arms fair in the UAE last month.

Video of the Soratnik is below, operating in tandem as the point vehicle for a Russian armored fighting vehicle

At 20-tons as promised by Krivoruchko, Kalashnikov’s new unmanned vehicle would be about three times the weight of Soratnik or about the same size as a U.S. Army M1126 Stryker ICV.

You see tiny Estonia, who borders Russia, is working on armed unmanned vehicles of their own. The THeMIS ADDER, a joint project by Milrem and ST Kinetics, is shown in action with the Estonian Defence Forces in the bottom clip– complete with gun camera footage.

Anyway, should the balloon go up in the Baltics, you can be sure the first international battle bot combat on a live battlefield is most likely going to be a thing.