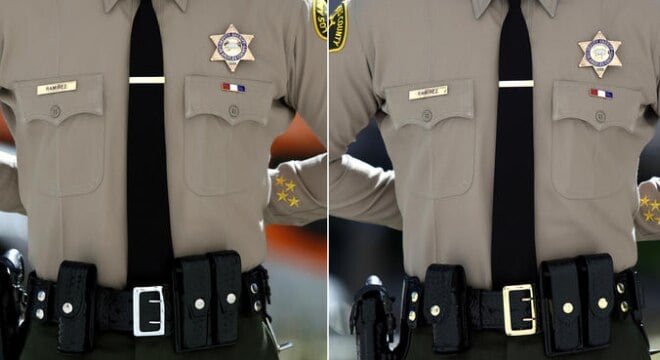 The difference between the new buckles and the old buckles is astounding. (Photo: LEO Affairs)

Sheriff Jim McDonnell is spending big bucks to change deputies’ belt buckles from silver finish to a gold one despite a budget shortfall that has left hundreds of positions unfilled.

As reported by The LA Times, McDonnell wants to change the current chromed duty belt buckles to a gold finish that will match the brass tie clips, badges, baton rings, key holders and lapel pins worn with deputies’ uniforms. The Sheriff says it will be more professional and can actually help with officer safety.

“The first impression somebody gets of one of our deputies in the field is what they look like when they approach. Are they squared-away looking? Do they have their gear in place? Are they physically fit?” said McDonnell.

Police union officials aren’t buying it as the department has 300 unfilled deputy positions and a recurring $250 million shortfall for the agency of 18,000 employees, half of whom are sworn law enforcement.

“The whole thing would be no big deal if the sheriff corrected all the other things wrong with our department,” said Sheriff’s Lt. Brian Moriguchi, who is also president of the Professional Peace Officers Assn. “But it becomes a big deal because people look at how you haven’t changed all the other things except the color of our belt buckle.”