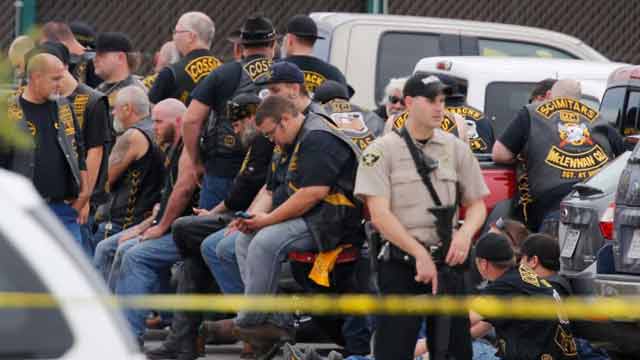 Only a handful of the nearly 200 people who were arrested have been indicted and none have gone to trial. (Photo: AP)

Citing a violation of civil rights, 11 people who were arrested following a shootout at the Waco Twin Peaks restaurant have filed a class action lawsuit.

The 55-page complaint was filed Tuesday by Dallas attorney Don Tittle on behalf of his clients. The defendants are named as former Waco Police Chief Brent Stroman, Waco police Detective Manuel Chavez, McLennan County District Attorney Abel Reyna, the city of Waco, McLennan County and dozens of John Does who were said to be involved in the plaintiffs’ arrests.

The plaintiffs are as follows:

The lawsuit alleges that the constitutional rights of the plaintiffs were “trampled on” when, immediately after the 2015 shooting, they were all arrested without reason or due cause. Another federal lawsuit filed last week by Morgan English, who seeks $350 million in damages, made the same accusations.

Like English, the above-named individuals complained about the use of nearly 200 identical “fill-in-the-blank” arrest affidavits that followed with a massive $1 million bond per person.

After more than two weeks, the bonds were reduced and the plaintiffs released, but their cases are not closed. In fact, according to the complaint, none of the 11 individuals have been indicted, and after nearly two years, their cases have not even been presented to a grand jury.

The lawsuit claims there has been no evidence presented to indicate any wrongdoing on the plaintiffs’ parts. However, Stroman, Reyna and Chavez previously said the plaintiffs have not been absolved of criminal wrongdoing and remain ”very much under investigation.” The complaint describes those actions as a “miscarriage of justice and assault on the United States Constitution.”

Reyna did not respond to a request for comment from the Waco Tribune-Herald, but previously called English’s lawsuit ridiculous. Likewise, McLennan County Judge Scott Felton and Waco City Attorney Jennifer Richie both said they would not comment on pending litigation.

The complaint does not name a specific monetary amount sought for damages but does request a trial by jury.

To date, Tittle has filed lawsuits for a total of 31 people arrested after the Twin Peaks shooting. But Tittle said the statute of limitations ends in May, and he expects “many more suits” to be filed over the next few weeks.

Thus far, none of those involved in the 2015 incident have gone to trial. The investigation surrounding the shooting, which left nine dead and more than 20 injured, is ongoing and it remains unclear whether law enforcement or bikers fired the first shots and which of those shots were fatal.